On lap 170 of 200, the Ford Mustang runners, including both remaining Penske drivers and the Front Row Motorsports entry of McDowell pitted for the final time to top off the fuel tanks, and managed to use this undercut to leapfrog long-term leader Denny Hamlin.

The Joe Gibbs racer, searching for an unprecedented third 500 win in a row, and fourth overall, responded with his fellow Toyota Camry exponents on lap 173, but it was too late to prevent the pack headed by Logano thundering past as Hamlin got himself back up to speed.

The next 25 laps featured the single-file racing that was prominent throughout the race, with Logano holding station out front and Kevin Harvick tucked in behind - the field awaiting the final laps to make their move.

On the final tour, approaching Turn 3, McDowell moved out to attack from fourth, and was covered by Keselowski. However, the #34 machine of McDowell, tagged Keselowski, who in turn tapped leader Logano.

Keselowski was spat towards the outside barrier, where the impact damaged the catch fencing on the outside, before the #2 was rammed by Kyle Busch.

In the ensuing melee, an unsighted Austin Cindric hit the back of Keselowski's car, causing a fireball and wreck that eliminated all but 11 cars, with the likes of Bubba Wallace, Christopher Bell, Ryan Preece and Ross Chastain also caught up in the incident.

McDowell carried on, racing reigning champion Chase Elliott and 2018 500 winner Austin Dillon before NASCAR threw the caution flags once the severity of the accident became known. All of the drivers involved escaped serious injury. 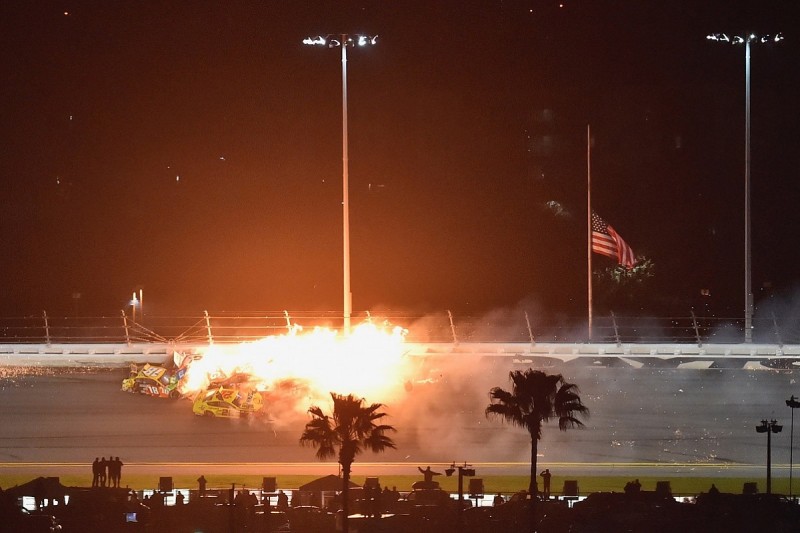 After a brief period of confusion over who was ahead when the yellow flags were shown, McDowell was confirmed as the winner, finishing 0.07 seconds clear of Elliott with Dillon a further 0.001s behind the Hendrick driver.

McDowell, who had qualified 17th, rose steadily throughout the race - which was halted for five-and-a-half hours for lightning and rain.

He avoided a 16-car melee on the 14th lap, although crew chief Drew Blickensderfer admitted to some minor spoiler damage on McDowell's machine to finish 15th in stage one and seventh in the second 65-lap segment.

It is the first time McDowell has won in his 359th Cup start, and just the third Cup victory for the small Front Row outfit, and first since Chris Buescher at Pocono in 2016.

Harvick took fourth ahead of Hamlin, whose hopes of joining Cale Yarborough as a four-time 500 winner were dashed with the undercut by the Ford runners. After dropping as low as 12th after his last lap, he rallied to fifth by the end, having claimed victory in both stages one and two.

Preece ran strongly for JTG Daugherty to claim sixth ahead of Chastain in seventh on his full-time debut in the Chip Ganassi Chevrolet.

Jamie McMurray, the 2010 winner, was eighth on a one-off return to the series, with Corey Lajoie (Spire Motorsports) finishing ahead of the returning Kyle Larson of Hendrick.

Cole Custer (Stewart-Haas) was the only other driver to complete the full 200 laps in a race of high attrition.

The first big accident on lap 14 was triggered in similar circumstances to the one on the final tour.

Kyle Busch attempted to get in the draft of JGR team-mate Christopher Bell, with the forward momentum causing Bell to tap second-place runner Aric Almirola.

Almirola could not keep control on the run to Turn 3 and tipped into polesitter Alex Bowman, in turn leading to a 16-car pile-up that eliminated Almirola, Bowman, Buescher, Ryan Blaney, Matt DiBenedetto, Ryan Newman, David Ragan, Anthony Alfredo, and driver of the Pitbull-owned Trackhouse Racing entry Daniel Suarez on the spot.

Tyler Reddick, Martin Truex Jr and William Byron were able to resume, having suffering from significant damage, but were not factors when the race ultimately restarted after the long weather delay - instead running around at the back.

Wallace, in the Michael Jordan-Hamlin owned 23XI Racing entry, had an eventful race, including leading for one lap.

After fighting with boss Hamlin for stage two honours, Wallace fell back late on, with an extra pitstop required for a vibration on his #23 Camry, before being caught up in the final-lap accident.

The 1990 500 winner, Derrike Cope, was the first driver to retire from the race, doing so after just three laps. Cope's Rick Ware Racing charter machine made contact with Wallace's, sending the former into the wall, and suffering damage that meant his final Cup start ended in retirement.