It was a fantastic comeback by the Joe Gibbs Racing driver, who had earlier been sent to the back for speeding in the pitlane.

Kahne had to fight his way by an inspired Juan Pablo Montoya to set up the thrilling showdown, but despite getting the nose of his Hendrick Chevrolet in front a couple of times, he could not make the pass stick.

Montoya had also been busted for pitlane speeding, but drove a great race to take third for Earnhardt Ganassi.

Brian Vickers was fourth for Michael Waltrip Racing, while Joey Logano boosted his Chase chances with a recovery drive to fifth following contact with Kyle Busch.

Busch's hopes of a hat-trick of Bristol wins following Truck and Nationwide triumphs were undone when he brushed the wall and slid into Logano. He did well to keep pace with the leaders, but his car was not good in traffic and he eventually finished 11th.

A host of potential winners were taken out in a huge restart crash that brought out the red flag.

Denny Hamlin and Kevin Harvick touched, probably after Hamlin cut a cut tyre following contact with Vickers, smashing into the wall and taking out Ryan Newman, Martin Truex Jr and Brad Keselowski. Truex suffered the most damage, but five strong cars were out of contention in an instant.

Carl Edwards had been the dominant driver for much of the race, but during a late-race caution period his Roush Fenway Ford started to splutter.

He switched ignitions, but to no avail and he was forced to bring the Fusion in to retire. Remarkably, it was the first Roush Fenway mechanical retirement of the season.

"I didn't have any warning," said Edwards. "That was the most fun I've had in a car for a long time. The car was perfect. The engine aside, we were the dominant car here." 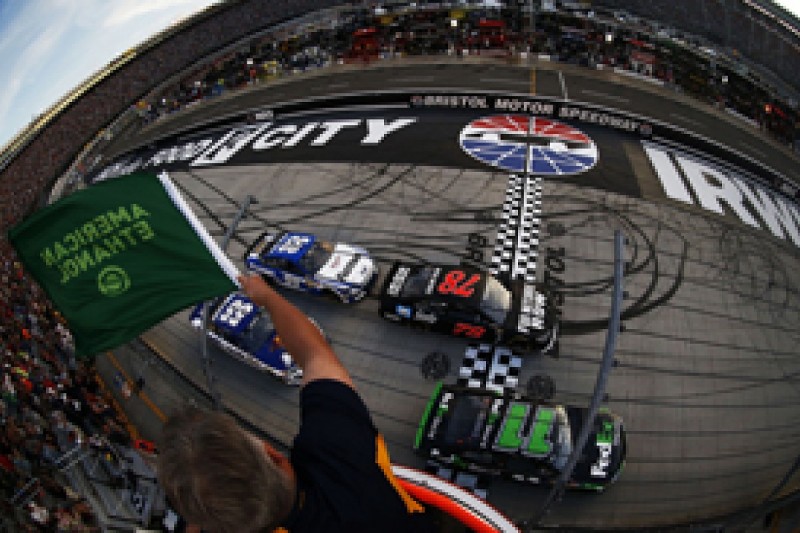 Poleman Hamlin led the opening laps, but was baulked by series debutant Ryan Truex, which gave Kurt Busch the opportunity he was waiting for.

Busch was running comfortably out front when he felt the handling of the Furniture Row Chevy go off. He pitted to have a loose wheel inspected, and lost over 20 laps as lengthy repairs were required.