Austin Dillon survived a massive wreck, a three-hour delay and a battle with Austin Cindric to win his way into the 2022 NASCAR Cup Series playoffs with victory at Daytona.

In a wild final stage, in which two multi-car crashes had already propagated, the final big incident resulting after rain had started to fall put Dillon into the lead.

As the field entered Turn 1 on 138th lap, rain – which had already been threatening for several laps – began to fall hard and started to bite.

Several cars immediately began spinning on the track. Dillon, who was running 16th entering Turn 1, was the first car to escape the carnage and emerged as the leader as the race was first placed under caution and then red-flagged due to the rain.

Dillon – whose only hope to make the playoffs was to win the regular season finale – restarted following the extensive delay in the lead on lap 145 but quickly lost it to Cindric.

With three laps remaining, Dillon got into the back of Cindric entering Turn 1 and got him loose, which allowed Dillon to reclaim the lead and he held off his Richard Childress Racing team-mate, Tyler Reddick, by 0.128 seconds to secure the win.

The win is the fourth of Dillon’s career and second at Daytona. He also won the 2018 Daytona 500.

“What a crazy race. I’ve got to thank my team-mate Tyler Reddick, everybody that makes this thing happen,” Dillon said. “Man, we’re in the playoffs!

“There was a lot going on there [battling Cindric]. I knew if it got to the white (flag) I was afraid if I waited too long I was afraid somebody would wreck behind us. So, I wanted to go ahead and get the lead.

“I had a big run to him and I knew I had a team-mate back there and we were in pretty good shape. Gave (Cindric) a little too much push there, got him loose and we went going.” 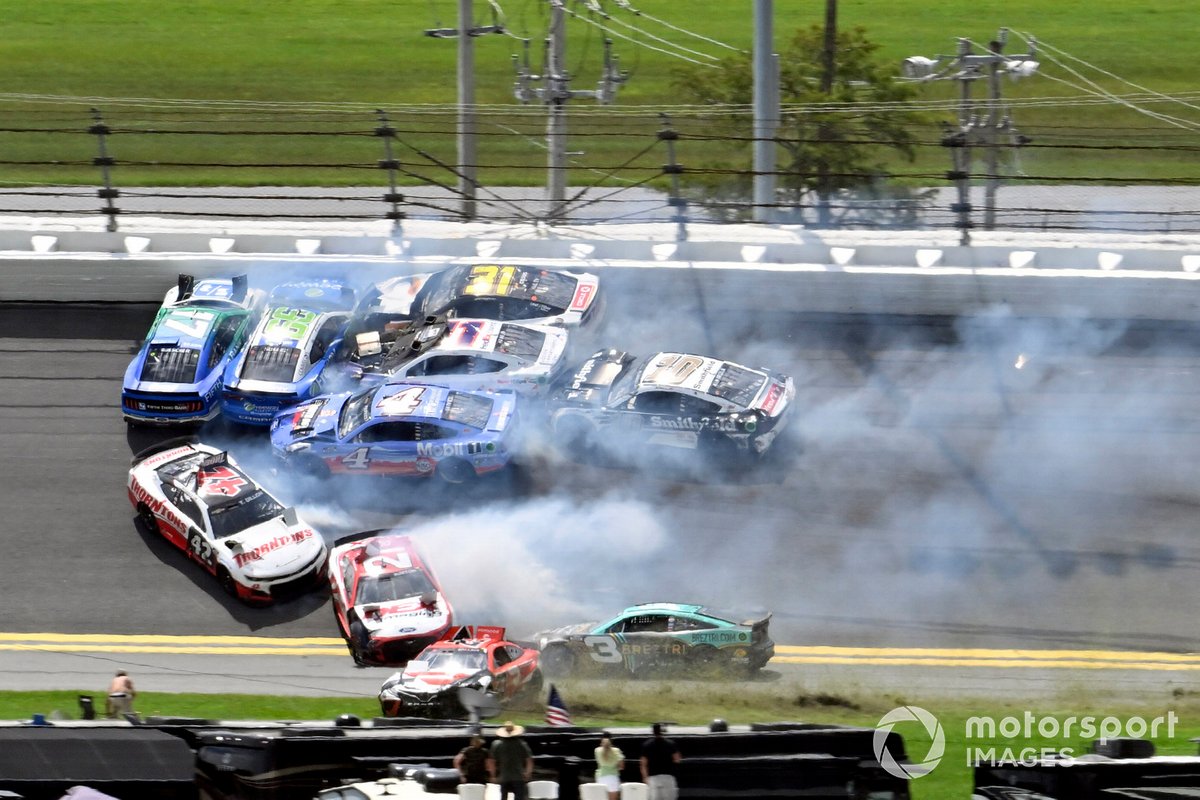 Although he was encouraged by his grandfather and team owner Richard Childress to wait until the final lap to make a move, Dillon said the smaller field made his choose otherwise.

“I felt like I had good (Chevrolet) team-mates behind me; if I could get the lead, (Cindric) would not be able to hold onto the draft,” he said. “We’ve done it in practice enough to know that you’ll lose the tail (end of the draft), and it’s hard to get back to it.”

The first of the Stage 3 crashes came just after the restart, as the field turned on the backstretch and Reddick got into McDowell to trigger a multi-car accident that also collected Martin Truex Jr, William Byron, Ross Chastain, Chris Buescher and Corey LaJoie.

Dillon had been collected in the second Stage 3 incident, where Briscoe and Bowman made contact on lap 125 while racing on the outside lane, which set off another multi-car accident that also collected Briscoe, Bubba Wallace, Harrison Burton and Ricky Stenhouse Jr.

But Dillon benefitted from the final incident, collecting his pass into the play-offs which begin next weekend at Darlington.

Cindric rallied to finish third in the race, while part-timer Landon Cassill was fourth and Noah Gragson ended up a career-best fifth.

Busch had earlier held off a late-charge by his team-mate, Truex, to take the Stage 2 win, despite being penalised for running over equipment on pit road during the break between stages and had to restart from the rear of the field.

Joey Logano had won the first stage, beating Chase Elliott by 0.039 seconds in a one-lap dash to the finish to take the early bragging rights.