Chase Elliott booked his place in the NASCAR Cup playoffs final with victory at Martinsville, as regular season champion Kevin Harvick was eliminated in a thrilling conclusion to the race.

Elliott will be joined in the Phoenix finale by 2018 champion Joey Logano, 2012 title-winner Brad Keselowski and 2010 runner-up and triple Daytona 500 champion Denny Hamlin.

A William Byron spin on Lap 450 of 500 around the 0.526-mile Martinsville track bunched the field together, as Harvick, Hamlin and Keselowski all sought a transition spot to Phoenix next Sunday after various calamities throughout the race.

Harvick, who has claimed nine race wins in 2020 was in the worst position of the trio, his Stewart-Haas Racing Ford Mustang machine suffering a puncture early on, relegating him to backmarker status for much of the race - and an afternoon spent fighting for the free pass position on caution restarts.

The SHR driver finally did get back on the lead lap on Lap 399, as Keselowski's fortunes then took a negative turn, as the #2 Team Penske was slapped with a pit-lane speeding penalty, dropping him to the rear.

With Elliott and Martin Truex Jr swapping the lead among themselves (with the leader in a provisional transition spot whilst the other dropped below the cut-line line), attention switched to fourth place in the standings as Keselowski and Harvick fought back through the midfield pack.

By Lap 470, Keselowski had got himself up to eighth, as Harvick toiled down in 13th, behind Matt DiBenedetto's Wood Brothers entry, as it became evident that Hamlin was being dragged into the battle to advance - the stage one winner also running on the fringes of the top 10.

On Lap 496, with just four to run, the trio were separated by just a single point, with Keselowski - now running in fourth after passing Alex Bowman - and Hamlin in the black, with Harvick - who entered the race 42 points above the bubble - on the outside.

Going onto the final tour, Harvick needed to pass reigning champion Kyle Busch for the crucial point that would have handed him a spot in the 'Championship 4' on countback against Hamlin, by dint of having the best finish in the semi-final round (second at Kansas). 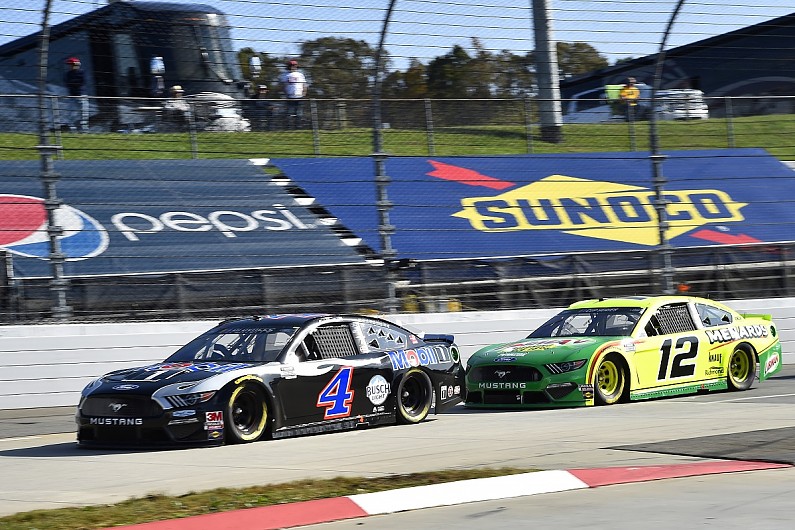 Rounding the final corner, Harvick dived to the inside in a self-described "last-ditch effort", tagging the door of Busch's Toyota Camry, spinning both and leaving Harvick facing the wrong way up against the pit-wall.

He was classified in 17th place and missed the cut-off as Keselowski and Hamlin squeaked through. It is the first time the regular season champion has not made the championship race since Harvick himself in 2016.

Up front, after Truex's challenge was ended with 25 laps to go, Elliott cruised to a comfortable victory to book the first appearance by a Hendrick Motorsports driver in the finale since Jimmie Johnson in 2016 - when he won his record-equalling seventh Cup crown.

Elliott's fourth of the season, 10th of his career and first at Martinsville was fortunate after NASCAR rescinded a penalty for a pit-road infringement after a crew member jumped the wall too early.

The #9 was due to fall to the rear on the subsequent restart, but because the jackman returned and touched the pit-wall without working on the car, as per regulations, the penalty was quickly scrubbed.

Ryan Blaney headed home the Penske fleet in second, with team-mates Logano and Keselowski in third and fourth.

Kurt Busch did have an outside bet of advancing to Phoenix, but the Chip Ganassi driver needed a win, entering the race 81 points below the bubble.

Despite looking feisty in the early stages, Busch's challenge to add to his 2004 title ended with fifth-place, just ahead of fellow Chevrolet Camaro driver Bowman.

Harvick's SHR team-mates Aric Almirola and Clint Bowyer - who clashed twice in the race - took seventh and eighth, with Kyle Busch in ninth despite the Harvick contact as DiBenedetto rounded out the top 10 on his Ford Mustang.

Hamlin was 11th as Truex Jr thanked his team for their season's efforts as the #19 JGR driver tried to struggle on with that loose tyre that took him out of advancing contention. He was classified in 22nd, with Johnson placing in 30th, five laps down having suffered a puncture late on in his penultimate full-time Cup race.