Joe Gibbs Racing's Denny Hamlin held on for his second consecutive NASCAR Cup victory at Kansas Speedway, having grabbed the lead with 13 of 267 laps remaining.

Hamlin ended a streak of three sub-par finishes by passing Kevin Harvick for the lead with 13 laps to go and held off a furious challenge from Team Penske's Brad Keselowski to win Thursday night's Cup Series race at Kansas.

The win is Hamlin's fifth of the 2020 season - the most of any driver so far this year.

Hamlin had led the race following the break between Stages 2 and 3, as the lead-lap cars all pit with Hamlin the first to leave pit road thanks to a two-tyre stop.

But two pile-ups in the following laps - one involving Matt Kenseth and Bubba Wallace just four laps after the final stage restart, and another immediately after that caution period ended, Joey Logano quickly got off the gas - apparently with a flat tyre - on the backstretch.

This helped Hendrick Motorsport's Chase Elliott into lead ahead of Hamlin, and although the JGR Toyota driver overcame the #9 Chevrolet, a hefty impact for Ryan Preece against the infield wall brought the race back under a caution, before a brief red flag to clear the track of debris.

Hamlin remained among the front runners, despite a further flurry of cautions in the final 70 laps of the race, but was overcome in several changes for the lead - Byron, Keselowski, Bowman and Harvick all spent spells in charge of the race.

But on Lap 255, Hamlin went to the outside of Harvick and was able to clear him for the lead, and was followed through by Keselowski - who picked around Harvick and moved into the runner-up position. 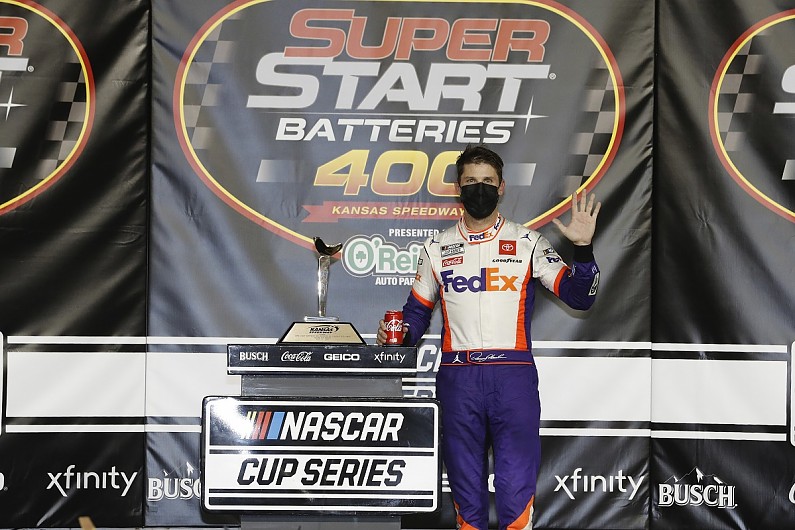 Keselowski had claimed Stage 2 victory, stealing past Penske team-mate Ryan Blaney to do so, as Martin Truex Jr collected third place for his efforts.

Harvick, having been passed for supremacy late on, was fourth as Erik Jones clambered up to fifth, putting three JGR cars into the top five.

Aric Almirola, who has been a consistent fixture in the top 10 this season, claimed sixth place ahead of Kentucky winner Cole Custer.

Kyle Busch was the last of the JGR cars in 11th, having taken Stage 1 victory from Hamlin.

Elliott was 12th at the line, while Ryan Blaney could manage no better than 20th.