Martin Truex Jr survived a spin to win the 2019 NASCAR Cup season's second race at Richmond, taking his second victory in a row and his sixth this year.

The Joe Gibbs Racing driver, who also won the track's April Cup round, was tagged by Ricky Stenhouse Jr in the final stage and sent spinning, but only dropped from first to third.

Stenhouse was a lap down at the time after making a green flag pitstop, and locked his brakes and made contract with Truex.

The erstwhile leader quickly recovered and then had a tense battle with team-mate Kyle Busch towards the end of the stage, but lapped traffic aided Truex in building a gap.

In a race dominated by Toyota's top team, JGR cars locked out the top four finishing positions and won every stage - Truex claiming the first stage and Busch the second, making this the first race at Richmond that a stage winner has gone on to win since the format was introduced. 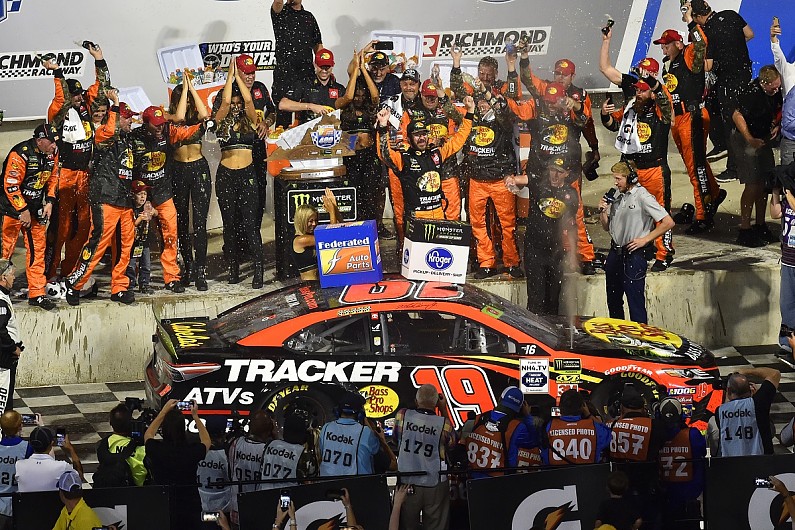 JGR cars led 310 laps out of 400, with the only other driver to spend time at the front being Penske's Brad Keselowski.

The polesitter led 54 laps at the start of the race, and returned to lead another 36 circuits in the final stage after returning to the fore during a post-caution pitstop.

After his strong early run, Keselowski finished in fifth, ahead of Ryan Newman - who secured his second-best result of the season with sixth.

The Roush Fenway driver ran as high as third during the third stage but couldn't compete with the dominant Toyotas.

Kyle Larson was seventh, ahead of Kevin Harvick. Although he started from the front row of the grid, Stewart-Haas driver Harvick only featured at the very front of the field in the opening few laps but did remain in the top 10 all night.

Clint Bowyer finished behind his SHR team-mate in ninth, while Daniel Suarez in a third SHR entry completed the top 10 and was the highest-place non-playoff driver.

While he didn't claim a top-10 finish, Joey Logano was the final playoff driver on the lead lap in 12th. Chase Elliott was the first post-season driver a lap down in 14th.

Among the other playoff contenders, Aric Almirola, Ryan Blaney and Kurt Busch filled 17th to 19th positions, while Hendrick pairing Alex Bowman and William Byron were 24th and 25th respectively in what was a difficult evening for the multi-championship-winning team.

Other than stage ending cautions, there was only three yellow flag periods - one for Bowman spinning following a retaliatory push from Austin Dillion, another for backmarker Reed Sorensen making contact with the wall amid brake problems and the last for Truex's spin.

Following the second playoff race at Richmond, Kyle Busch and Harvick have secured their place in the 'round of eight', regardless of what happens at the Charlotte Motor Speedway 'Roval' next weekend, while Truex's place in the next round had already been secured with his win at Las Vegas last week.

Bowman, Jones, Bowyer and Kurt Busch are the drivers currently on course to be eliminated after the next race.