While the Indianapolis debacle lingers as a political scandal, it was, above all, a technological failure that led to the boycott of seven teams and all that ensued. Craig Scarborough analyses the fundamental problem of the Michelin tyres at the US, and their failing under load on the banked Turn 13

Indianapolis is unusual as a Formula One track in that it has a very long high speed corner; many tracks have high speed corners but they rarely last as long as the run through the final turn at Indy.

The corner is approached at high speed from the exit from the infield section and followed by a long run down the main straight. The consequence is that the left rear tyre is pushed into the banking at great speed for several seconds and then run at even greater speed down the straight; this could be the longest and largest load applied to a Formula One tyre on any track. Michelin have raced on the US track many times, and while tyre failures have occurred in the race through wear the failures on Friday were of a very different nature.

A Formula One tyre is fundamentally made of the same components as a road tyre; that is bead, sidewalls, plies, belt and tread. These components are bonded together by vulcanization at the end of the manufacturing process. The sidewalls are a wedge profile that forms the structure of the tyre from the bead around the wheel rim to the tread. Joining the sidewall and tread are the radial plies, and the actual rubber to rubber interface is two pieces. After vulcanizing the parts are effectively one homogenous molding.

As is usual for selecting tyres for a race, the tyres were selected two weeks ago after consideration of the Michelin teams testing in Europe. As a result of Toyotas failures Michelin found that their tyres were literally falling apart; the side loading on the tyres was making the sidewall detach from the tread, leading to total tyre failure. Other teams checked their tyres and all bar two teams (Renault and McLaren) were found to be in the early stages of a similar failure.

Indianapolis is unique in Formula One as it has a fully banked corner; some circuits employ a little camber in some corners, but Indy at banked at over nine degrees and, with such a large radius, is a serious challenge for the Formula One chassis. That is not to say the corner is tricky to negotiate; indeed such is the downforce generated at speed that the car is well glued to the ground and the driver has settled in for the 20+ second flat out ride towards turn one. 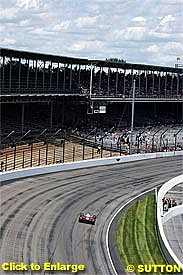 The corner is approached out of turn 11 at 130kph in third, then accelerate through turn 12 and up to 250 kmph into top gear for the flat out run to turn 13, 305 kph with over 3g of side force and then flat out for the main straight and speeds of up to 335 kmph.

The banking allows cars to corner faster as centrifugal force is not trying push the car sideways across the track but push it into the track, the 3g cornering force no longer acts horizontally but effectively points downwards towards the outer tyre. The gravitational force effectively adds to the aerodynamic forces to press the car to the track. With this side loading the whole car is trying to pivot over the outer shoulder of the tyre, then as F1 cars are rear weight biased more load goes into the rear outer tyre.

Indianapolis was resurfaced during the winter; to counter the slicker fresh tarmac grooves were diamond cut into its surface, which both improved drainage and also gave more grip to the track. Formula One cars could have probably found their grip without this, but as the track is largely used by American racing cars that are generally heavier, with harder tyres and less downforce, they needed the extra mechanical grip this provided.

There were in fact two incidents; Ricardo Zonta, Toyota's third driver, was the first to crash in turn 11 just after starting the afternoon practice session. As his tyre failure was in the slower turn his crash was at much lower speed, and he reported no ill effects. Then Ralf Schumacher suffered his crash, the second major crash he has had at that corner after his more serious shunt last year. 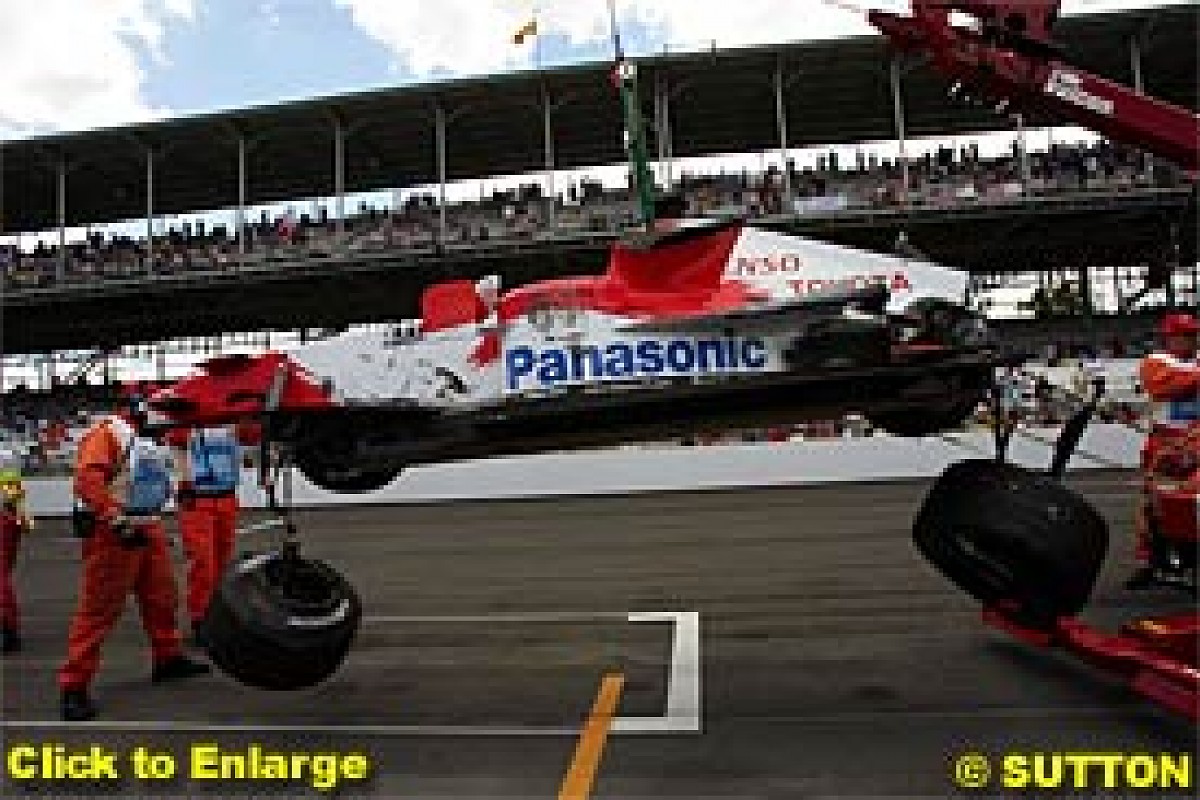 On his first flying lap he took turn 12 as normal and the tyre failed, sending him into a heavy impact with the outer wall, smashing the wheels back into the chassis (retained by the tethers) and knocking the wings off. The car bounced back down the track and came to rest with a small impact against the inner pit wall.

This year he was able to extract himself from the car and was clearly winded by the incident but actually had no injuries. The heavy side impact did not damage the car too badly, and most of the bodywork and all the safety structures were intact.

The team checked the telemetry and found no mechanical problems with the car, and no losses in tyre pressure up to the accident were found; a tyre failure was identified, but not the cause of the tyre failure. Michelin checked the tyre for cutting, perhaps as a result of Zonta's accident, and found both tyre failures to be of a similar pattern and not caused by damage. This started the alarm bell ringing for Michelin; as previously mentioned other teams tyres were checked and found to be the early stages of similar failures.

Why Did the Failures Occur?

Why the problem occurred at a race track at which Michelin has so much experience of raises some questions. One theory is that the change in track surface lead to greater tyre loadings, but why then did Bridgestone not have similar problems? Two answers are both probable; firstly the Bridgestone tyres are designed to be more flexible and generally adopt a more conservative approach, allowing a safety margin, and secondly Bridgestone's sister company Firestone raced at the track only a few weeks earlier, which could have provided some data on the new surface, allowing Bridgestone to react. However it is unlikely that Bridgestone had sufficient time to react with a drastically different tyre to that planned for the race.

A last explanation is that the batch of tyres designed for the specific demands of Indy were (on paper at least) good enough to last; only an error during their manufacture led to the structural failures. This last explanation is the most likely, as although that specification of tyre would have been sufficiently tested, the batch made up for the race would have come from a dedicated production run, and during this process the fault could have been created.

From this point the Michelin technical team returned tyres to France for laboratory examination, and in return tyres of a specification used at Barcelona (another track with a relatively long corner) were flown out in expectation of a dispensation from the FIA to allow their customer to switch to these tyres. The FIA refused to allow the different tyre specification to be run, as set out in the rules, so Michelin runners were asked to alter their set up to give the highly loaded outer tyre an easier time, and the practice sessions and qualifying proceeded. Most Michelin runners limited themselves to only 10-12 laps in each session, but otherwise ran flat out as with any other weekend with the full expectation of a resolution for the race.

Race day arrived and overnight meetings failed to agree the use of the Barcelona tyres, with Michelin unable to guarantee safety. This left their teams with several options to put to the FIA: if they could not run with the new tyres then the cars would either have to run slower through turn 12 or not race.

With Michelin unsure about giving a green light to the Barcelona tyres even if the FIA allowed it, this was not a an option - there was little precedent since the FIA mandated only two types of tyre per team per race weekend, and the rules also demand that the tyre selection is made on Saturday morning.

There were several options to slow the cars, and building a chicane was the most attractive to the Michelin teams and their allies. A tyre chicane to slow up the cars before turn 12 and then allowing the cars to re-accelerate towards the main straight would have cleared up the issue. The FIA rejected the option, which would have been risky - the cars were all set up to run on low downforce setting, and sending a car at over 200 kmph into a tight braking area would have put the drivers at risk.

There may also have been insufficient time to safely construct the chicane, such that tyres wouldn't be sent into the crowd nor onto the track should a driver collide with them. The layout and make up of the temporary chicane would also have required some forethought, even if the materials and time were available. There is a precedent for temporary chicanes dating back to the post Senna era when drivers where jittery about fast unsafe corners, but these were often added in the early stages of the weekend. This was also a time when cars electronics were simpler; the car now has the ability to know where it is on the track and what electronic set up to run to alter the engine and gearbox behavior.

Forcing the cars to run slower through turn 12 was an option put forward, with a real solution being suggested. Whether this would have included Bridgestone runners, and where and at what speed the limit would be imposed, weren't made clear. But cars running on a pitlane limiter on the banking would have been as ridiculous as the final outcome appeared.

With no agreement made and the teams still in meetings right up to the point the pitlane opened it was clear that no true solution could be found. Michelin had released a statement along with their suggestions on resolving the issue that stated that their tyres could not be run at full speed in the race. Faced with this fact the Michelin teams had no real option but to retire from the race, leaving the Bridgestone runners unaffected by the whole tyre problem issue and alone to race themselves.

As Indianapolis is such a one off circuit the chance of an identical incident at another track is unlikely. However with Michelin supplying 70% of the grid another manufacturing fault could leave Formula One open to a similar debacle, and even Bridgestone suffering a problem with their tyres would wipe 6 cars from the grid.

Perhaps the rules need to be reworded to allow the suppliers special dispensation to run a different tyre should such a safety critical problem occur. It would have to be clear that if they brought tyres that were safe but not fast or durable enough then the rule could not come into play. Equally other suppliers with critical parts (brakes, wheels, fuel rigs) of a large proportion of the grid should be allowed some flexibility. But with the FIA mooting a single tyre supplier for 2008, the will to amend the rules may not presently be there.