Martin stunned in the Doha GP when he claimed his maiden pole in MotoGP and added a second to his tally at the Red Bull Ring on Saturday, posting the first ever sub-1m23s lap of the circuit to claim top spot after a late effort for Quartararo was scrubbed for exceeding track limits.

Having missed four races with injury, this weekend’s Styrian GP marks only the sixth MotoGP start for Martin.

Fabio Quartararo didn’t mess about on his opening salvo of laps, moving almost six tenths clear of Yamaha team-mate Maverick Vinales with a 1m23.259s on his first lap.

The championship leader then improved to a 1m23.075s to extend his advantage, though this lap did come under threat from Pramac’s Martin before the Ducati rider made a mistake at the penultimate corner and had his time cancelled.

After the first runs in Q2, Quartararo led Ducati duo Jack Miller and Martin, his advantage 0.225s at the head of the timesheets.

With just under four minutes to go, Ducati’s Francesco Bagnaia edged ahead of Quartararo with a 1m23.038s.

But this didn’t stand for long as Martin lit up the timing screens on the first flying lap of his second run to produce the first ever sub 1m23s lap of the Red Bull Ring on a MotoGP bike with a 1m22.994s.

Quartararo kept shaving time off his deficit to Martin across his final flying lap and posted a 1m22.958s to edged ahead of Martin.

But the Yamaha rider got out of shape at Turn 9 and went out of track limits, which led to his lap being cancelled and dropped him to third. 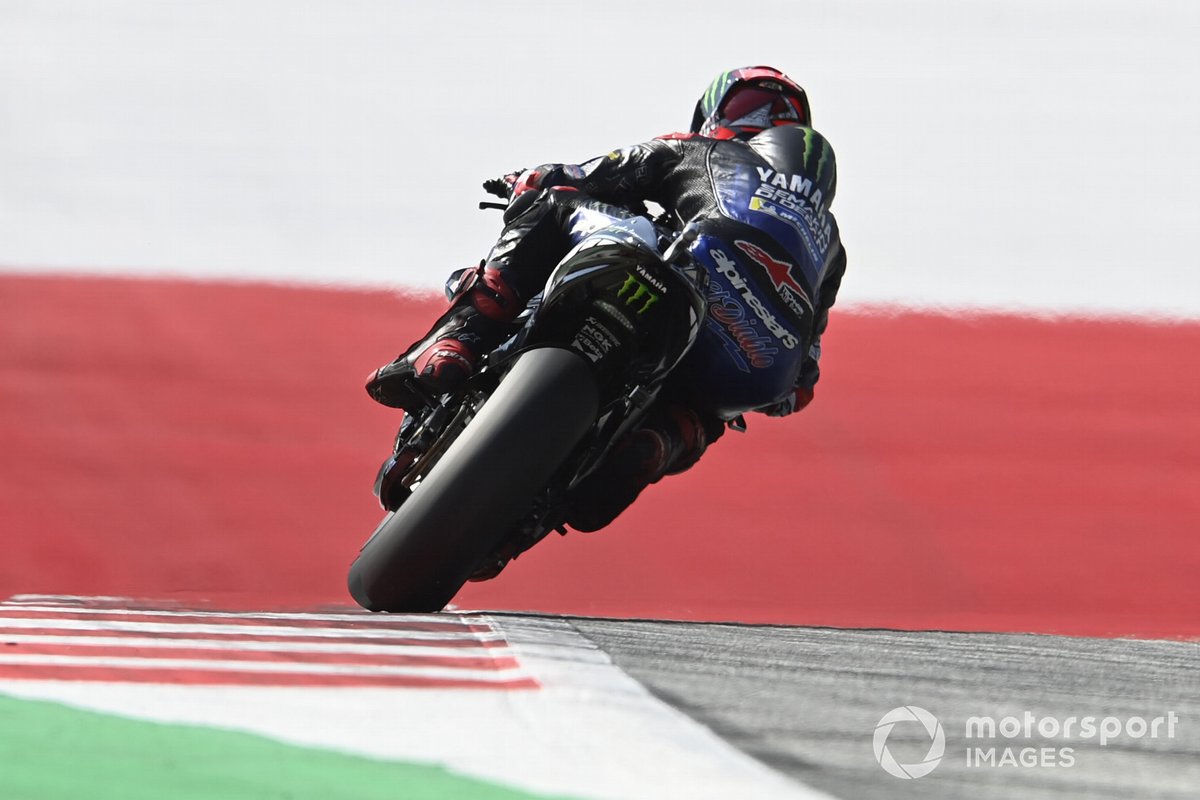 Bagnaia will start from second on his factory team Ducati having missed pole by 0.044s, with his team-mate Jack Miller heading row two in fourth.

World champion Joan Mir took his best qualifying result of the season in fifth on a GSX-RR fitted with the ride height adjuster device – though a crash in FP4 on that bike almost robbed of the chance to utilise the new item in Q2.

Johann Zarco completes row two on the second of the Pramac Ducatis, with Aprilia’s Aleix Espargaro heading row three in seventh ahead of Marc Marquez after a late crash at Turn 3 for the Honda rider.

Yamaha’s Maverick Vinales was a disappointing ninth having ended FP3 third-fastest, with LCR Honda duo Takaaki Nakagami and Alex Marquez, and the KTM of Miguel Oliveira – the latter two coming through Q1 – completing the top 12.

Avintia rookie Enea Bastianini shot to the top of the order right at the end of Q1, but was cruelly denied a place in Q2 having been deemed to have exceeded track limits at Turn 8.

Instead, the Italian will start Sunday’s race from 20th on the grid, while Suzuki’s Alex Rins was just a few hundredths outside of a Q2 place in 13th.

He will start alongside KTM wildcard Dani Pedrosa, who was an impressive 14th in his first qualifying session since 2018, while Honda’s Pol Espargaro will start 15th.

Brad Binder was just under half a second shy of his team-mate Oliveira in Q1 but will have to start from 16th ahead of Petronas SRT’s Valentino Rossi and his Avintia Ducati-mounted half-brother Luca Marini.

Iker Lecuona was 19th on the Tech3 KTM ahead of Bastianini and Aprilia’s Lorenzo Savadori, who crashed at Turn 8 at the end of the session.