Zarco replaced Smith in the off-season on what was a two-year deal, but has struggled badly to come to grips with the RC16 and decided to vacate the seat for next year.

Impressive Tech 3 KTM rookie Miguel Oliveira has been mooted as a potential replacement, but the Portuguese rider expects to remain part of the satellite team, with team boss Herve Poncharal keen to keep hold of him.

This meant the factory team has been searching for a MotoGP-calibre rider in what is now a narrow pool of free agents, with team manager Mike Leitner confirming to Speedweek that Smith - who currently works for Aprilia in a test role and rides for the Petronas-run MotoE team - was among the candidates.

"I know that I'm on the list," Smith told Autosport.

"KTM know that I'm very keen to come back.

"When I left the championship last year, I said that this year would be a year out but my objective was to come back in 2020 and that's not gone away.

"The chance of happening, let's say, two months ago was very, very small. The chance of that happening as of today is a lot bigger.

"But, yeah, I'm still not really focusing on it because it's not a reality, and until it's a reality, it's not something that I try and think about. 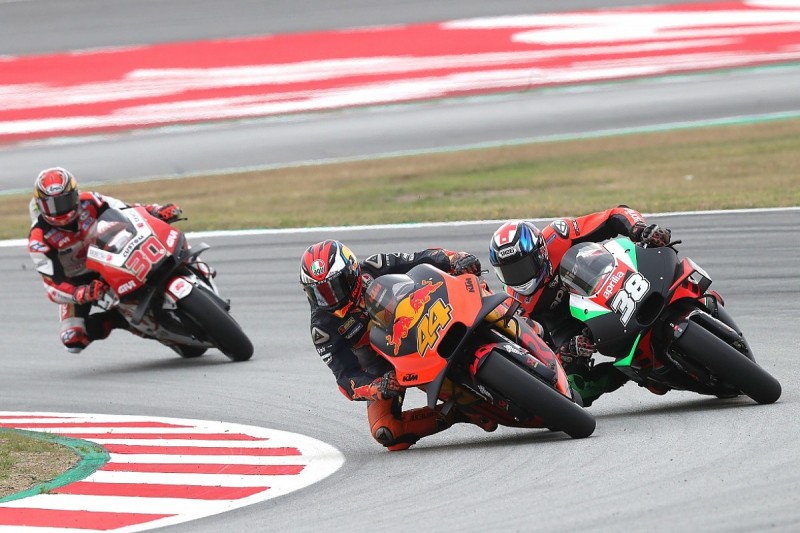 Smith says his two-year Aprilia deal "allows a little bit of wiggle room" for him to return to a full-time MotoGP ride in 2020.

And while he accepts that a KTM reunion would come with some risk, given that he could end up a stopgap for KTM to promote Oliveira or a bring in big-name signing in 2021, Smith believes it would be a risk worth taking.

"I would like to be back inside of MotoGP, not only for one year but for the future," he explained.

"Now, all contracts are up, let's say, towards the end of 2020 - where's the best possible window that you can display your talents? That's on a MotoGP bike.

"I need to be in the mix. Unfortunately doing MotoE next year and winning that championship is not going to have anybody knocking on my door for 2021 [in MotoGP].

"Although it's a one-year deal [with KTM] - the contracts [for 2021 and beyond] are going to be signed after four or five races anyway, so really it's not even a one-year deal, it's a four-five race deal to try and get you in the shopping window for the future.

"It seems crazy to do it, let's say, but I also I do it because I love it and I just play each year on each year.

"This game's a risky game, we never know how things are going to go, so you do the best you can every single race, every single year, and worry about the future when it comes."