A "heartbroken" Bradley Smith says the electronics on his Aprilia MotoGP bike "let me down" and led to his crash out of the top 10 in the French Grand Prix.

Smith topped the wet FP1 session at Le Mans on Friday and stormed through from 19th on the grid to run seventh by the fourth lap.

Though he was pushed down to ninth in the following tours, Smith was still well on course for his and Aprilia's best result of the season before he was flicked into retirement at the last corner on lap nine.

Smith says the problem was similar to what caused his FP2 highside, in that the RS-GP's electronics "wasn't able to catch me" when the rear broke away from him.

"Heartbroken more than anything," Smith said.

"A little bit the same problem we always have, electronics let me down.

"It wasn't able to catch me, a bit like Friday afternoon's one and down I went.

"It's obviously frustrating from that point of view, but I gave it absolutely everything that I had, I took the opportunity with both hands.

"I was running, not with the Ducati boys, but in that group that ended up fight for that podium and Alex Marquez was able to get there, [Miguel] Oliveira wasn't far away. 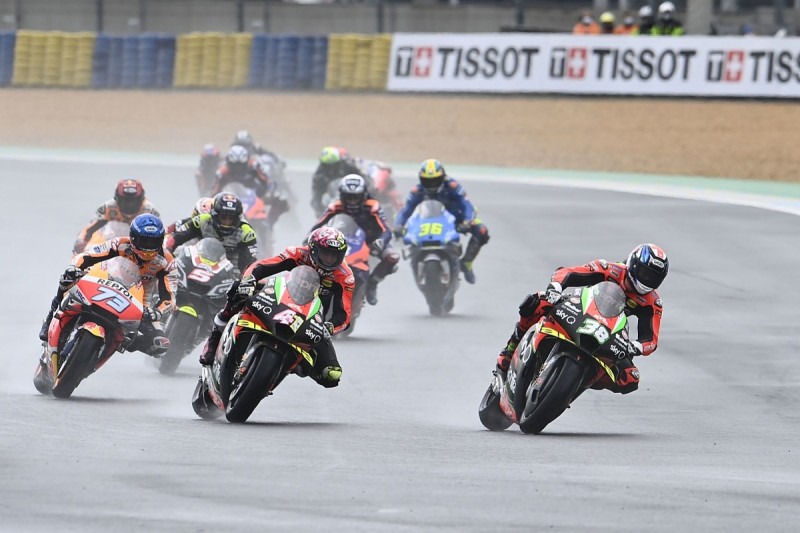 "I felt comfortable, I wasn't making any mistakes, trying to save the tyre because I could feel the tyre started overheating.

"I just had everything under control and just let down from the electronics side."

Team-mate Aleix Espargaro did get to the finish in 14th, though was 39.1 seconds from the leader having felt like he was "riding on ice" with the Aprilia's lack of traction as the track started to dry.

"[It] has been a very a difficult weekend and the race was difficult as well," Espargaro said.

"I didn't have traction all weekend, so in the wet was difficult.

"In the first part of the race, with full wet track I managed to be more or less ok because I was able to do a good start, and then I was able to follow the first top eight guys.

"But after 10 laps the track started to get more dry and they start to have more traction and for me it was very difficult because the problem was I take a lot of risk to avoid a highside because I felt I was riding on ice.

"But, even like this I arrived very far from where we have to finish.

"So, disappointed with our overall weekend we're missing a lot of grip."

Was the MotoGP French GP the disaster it seemed for the home hero?