Quartararo fired in a late 1m32.081s to outpace nearest rival Maverick Vinales by 0.356s on the works Yamaha, with only three other riders managing to lap within a second of the Frenchman.

The top three in both of Friday's practice session - Vinales, Quartararo and Marc Marquez - assumed their usual positions at the sharp end from the get go in FP3, with Marquez setting a 1m33.051s to lead Vinales by three hundredths, and Quartararo by a tenth.

Quartararo improved to within 0.052s of Marquez early in the second half of the session, and Vinales was then up on the reigning champion's time after three sectors on two separate occasions - but Marquez's laptime held out until the final minutes.

It was then that Vinales used a fresh pair of soft tyres to put together a 1m32.437s, going six tenths clear in FP3 and overhauling his own benchmark from Friday.

However, Quartararo responded immediately with an effort just under a tenth quicker, before lowering the benchmark further still with his next attempt and making sure of the top spot.

Behind the two Yamahas, Pol Espargaro was a standout third for KTM, seeing off Marquez by less than half a tenth despite the championship leader improving at the end. 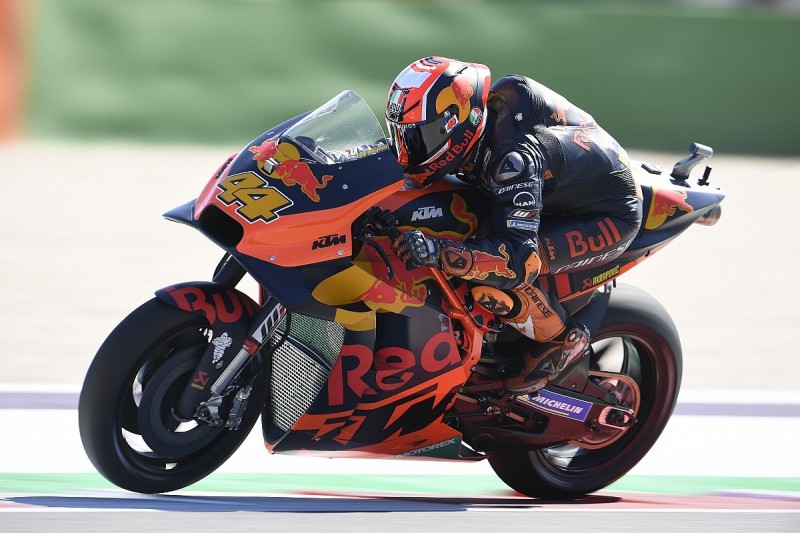 Quartararo's team-mate Franco Morbidelli shot up to fifth at the chequered flag, leading LCR Honda's Takaaki Nakagami and Valentino Rossi, who made it four Yamahas in the top seven.

Suzuki's Alex Rins faced a potential battle through Q1, but managed to fight his way into the top 10 at the last second, taking eighth ahead of the two Ducatis of wildcard Michele Pirro and 2018 Misano race winner Andrea Dovizioso.

Rins' last-gasp heroics denied KTM's Johann Zarco a spot in Q2, the Frenchman missing out by just 0.033s - with Tech 3's Miguel Oliveira only another half a tenth down despite nursing a shoulder injury after his collision with Zarco at Silverstone.

Also missing out was Jorge Lorenzo in 19th, the three-time champion's FP3 compromised late on when he suffered a moment as the front wheel of his Honda touched the ground exiting the final corner - apparently caused by his front brake dragging.

Aprilia's Andrea Iannone was 22nd, having suffered his second crash of the weekend at the Rio right-hander.