Valentino Rossi says Fabio Quartararo's star showing during MotoGP's Jerez weekend was down to the rookie, stating Quartararo "made the difference" compared to his fellow Yamaha riders

Frenchman Quartararo led a one-two for new Yamaha satellite team Petronas SRT in qualifying, and was running second in the race when he retired with a gearshift load cell failure.

While team-mate Franco Morbidelli had begun to drop down the order after pressuring leader Marc Marquez early on, Quartararo was maintaining pace and looked in with a strong chance of securing a maiden podium before his retirement.

Factor Yamaha rider Rossi, who acknowledged the Petronas Yamahas were "very similar" to the works bikes after qualifying, said the situation was more clear than when Johann Zarco would outperform the factory M1s while riding an older-spec Yamaha for Tech3.

"In the last two years, we had confusion. But because the new [Yamaha] stuff doesn't work," explained Rossi.

"With Zarco, a lot of time he had [an] older bike but was faster than us - because Zarco is a very fast rider, but also because sometimes the old stuff was better than the new.

"Now I think the situation is more clear for everybody, and the bikes are very, very similar.

"I think that for example this week the human made the difference, because Quartararo was always very, very fast, because he rode better.

"And without the problem [he would have] finished second, the best Yamaha, second or third - I don't know, I didn't see the race, but way in front.

"So it's good, and it will be difficult I think to beat him also in the future.

"Now the situation is more [clear] - the bikes are all the same, so it's more easy to develop." 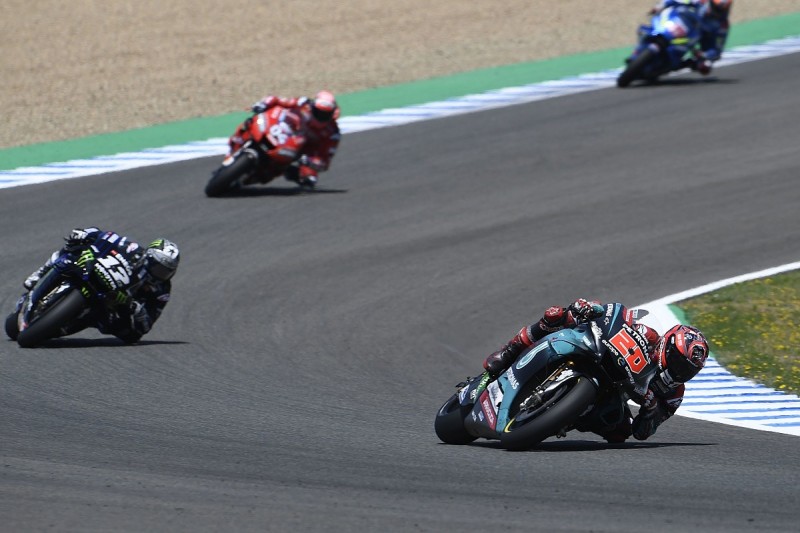 "He was really good," said Vinales, who finished third.

"It's a very difficult track for us, for the Yamaha, and he has been able to ride very fast and consistent all weekend.

"It means that he is really good. It's good to have someone like this inside our team that can push you more and understand the bike more."

Asked what differences he was able to observe in the behaviour of the Petronas bikes when running behind Morbidelli and Quartararo early on in the race, Vinales said: "No, the bikes were really similar, honestly.

"But anyway they showed really good speed in the first laps - it's a lot to understand and to improve, about the satellite team.

"It's important now that Fabio and Franco are fast, because you have more data to check."