Rossi rode with a new carbon swingarm, brake cover and exhaust in practice for the San Marino Grand Prix, while his team-mate Maverick Vinales stuck with the old parts.

Rossi feels that Yamaha's new updates are better but admitted that it could be down to the fact that the bike appears to suit the Misano circuit, owing to the performance of the riders not using the new parts.

"The two days of testing after Silverstone [at Misano] was positive for us because we worked very hard, especially on the new stuff [parts] and at the end for me was quite clear that the new stuff is better," said Rossi.

"We decided to concentrate on this. It's a good start, a good Friday. It looks like that all the Yamaha [riders] are very competitive and is a bit of a surprise.

"It is a good feeling because looks like that also with the different configuration between me, Maverick and also with the Petronas team, our bike works very well here in Misano. 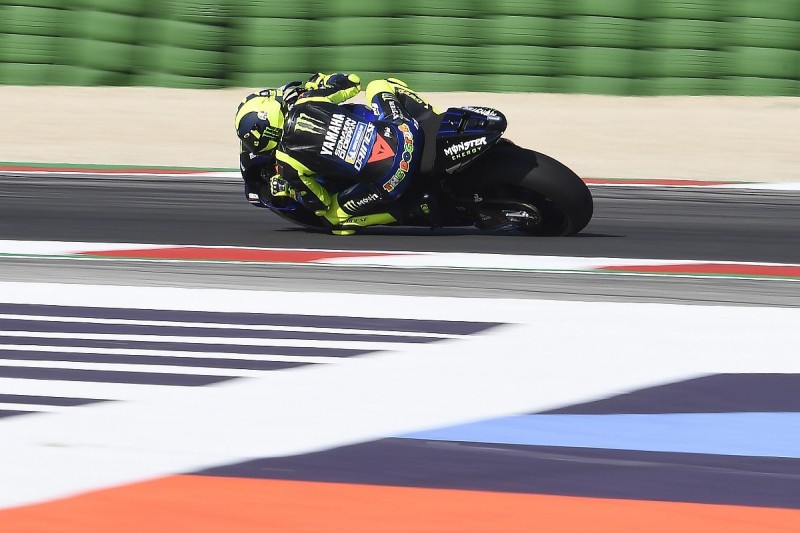 "Quartararo and Franco have the normal stuff and they are fast. Is also the marriage between the bike and the track."

Rossi added however that he is not yet completely happy with the bike, saying: "For me personally, we have a lot to do still because I don't feel fantastic with the balance of my bike.

"[We] need a bit more grip in acceleration. In time attack I am in P4 but I need to try to be closer to Vinales and Quartararo."

Vinales didn't use the new swingarm and exhaust as he is not yet convinced that it is an improvement, but is ready to switch to them if Rossi shows big steps forward.

"We need to do more laps to understand better, what it brings to the bike or not," said Vinales.

"But anyway somehow I get a good feeling with the standard bike and I don't want to change that feeling.

"For sure if it's necessary I will try.

"If we see that Valentino is fast, constant, have a very good rhythm, we will try - but at the moment I have better feeling with the standard bike."

Lorenzo: Back pain will not improve at MotoGP Misano round