Qatar MotoGP qualifying cancelled due to Losail track being too wet

While the chance of rain featured on forecasts for each day of the Qatar Grand Prix week, the first two days of running at the Losail circuit were not affected.

That changed with storms and heavy rain on Saturday, and even though it stopped falling several hours before the first scheduled session, the track failed to dry out sufficiently.

With concerns over whether riders would be able to race in the wet under lights, an extra session to evaluate the conditions was initially scheduled for early Saturday evening.

Fourth practice was delayed by 35 minutes to 8:30pm pending track conditions, with qualifying to follow, however 20 minutes before that time organisers announced that all schedules for Saturday evening had been cancelled.

Grids for all three classes will be determined on the results of the three completed practice sessions on Thursday and Friday, with Yamaha's Maverick Vinales to start on pole position in MotoGP, ahead of Andrea Iannone.

Jorge Lorenzo will start his first race with Ducati from 12th place. 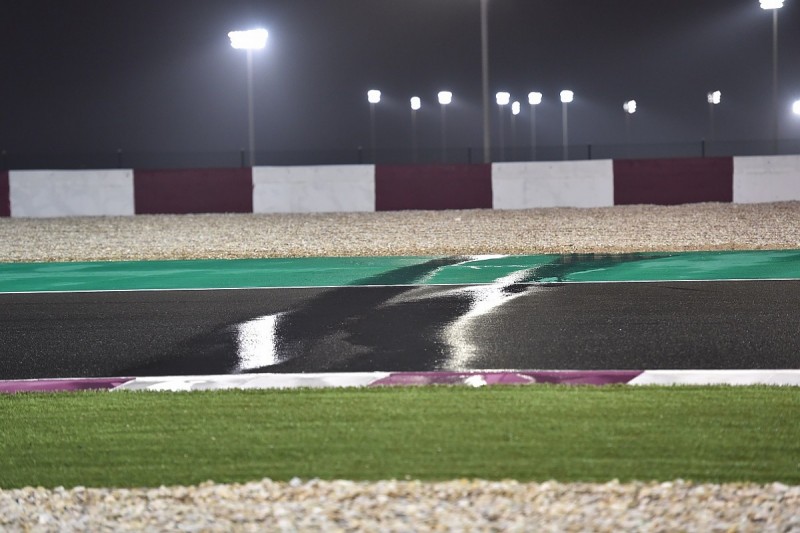 While most of the 3.375-mile layout was dry, rivers of water ran across the track in numerous locations, despite efforts to clear them.

There were also concerns about water remaining on the kerbs and astroturf run-off areas, and large pools of water in the gravel traps.

While the door had been opened to move the race to daylight hours on Sunday, it remains scheduled for 9pm local time, after Moto3 and Moto2.

Warm-up sessions for all three classes, though, have been extended from 20 minutes to 30.