Following heavy rain at the Losail circuit on Friday evening and Saturday, the track failed to improve sufficiently for any Saturday evening running.

While most of the circuit was bone dry, rivers running across it in places were the main concern, along with pools of water in the run-off areas.

The grid will be set on practice times and led by Yamaha recruit Vinales.

"It was too risky to go out," said Vinales. "Sure some riders will be disappointed, others a little bit more happy, but for me first is safety and today was quite difficult.

Riders have never run under lights in the rain in Qatar, with the 2009 race postponed a day by poor weather.

Plans for Sunday this year include an extended warm-up session to give riders chance to check track conditions before racing.

"The problem is that we had extreme conditions," Marquez, who will start third, said.

"Last night was really heavy rain, and here in Qatar it's not usual for it to be this wet and maybe they are not able to prepare like people in other countries.

"Today the problem was that the run-off areas were like a small lake. This is dangerous if you crash.

"Then in some parts some rivers crossing the middle of the track.

"I hope if the rain is normal, we can test and we can ride.

Most pre-event weather worries had centred around concerns about reflections from lights off a wet track surface, rather than drainage. 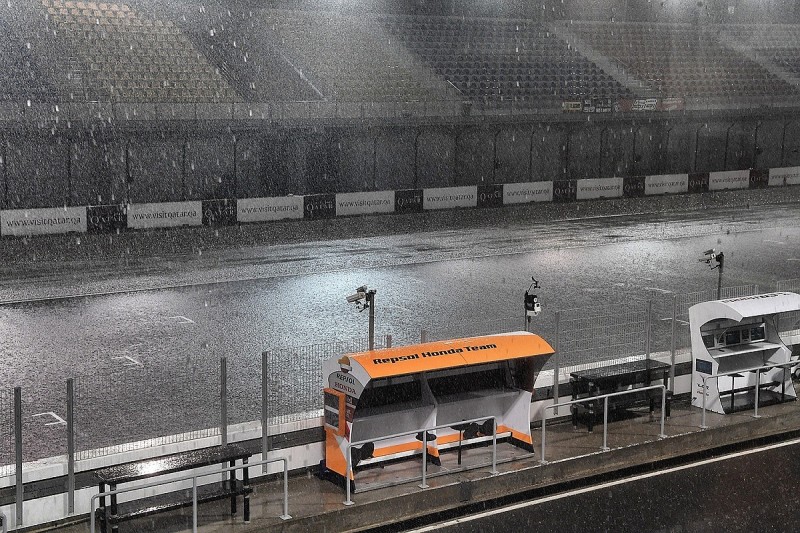 "There was some misunderstanding," he said.

"Capirossi just rode the bike and it was artificial rain. He said it was a possibility but the decision was for the riders.

"But he said it was a small possibility, but riders have the last decision.

"Yesterday we were in the Safety Commission and we spoke about it, and everybody was agreed that if Capirossi said it was a possibility, we must try and understand it."

Valentino Rossi lost out through the cancellation as he was only 10th on practice times, but he agreed riding was impossible.

"For me personally it's very bad because I have to start behind, but it was the right choice," said Rossi.

"It was the only decision that they could take."

Qatar MotoGP qualifying cancelled due to Losail track being too wet