Petrucci and Dovizioso were fighting for fourth during the race alongside Joan Mir, but their battle allowed Morbidelli to close in.

Both started the final lap ahead of Morbidelli, but Petrucci ended up ceding position to the SIC Yamaha rider at the very end of the lap.

Petrucci said after taking his maiden MotoGP victory at Mugello that he would support Dovizioso's title bid, but said not attacking his team-mate was costly for his own race.

"The fight with Dovi was very difficult, a great battle," said Petrucci.

"I always have to be very careful about him, because he is second in the world championship, so if I have to make a risky overtake, I avoid.

"On the last lap, however, in order not to attack him, I didn't cover myself, and Morbidelli passed me at the last corner.

"I knew he was there and he was coming up strong, but it's clear that I'm in a strange position and it's difficult for me.

"Maybe because nobody expected me to be third in the world championship.

"Our goal is to win the world championship with Andrea, so they told me not to do anything risky and today I would have to do something risky to pass him."

Petrucci said he wants to have further discussions with Ducati about battling with Dovizioso on track in the future.

"It was the first thing I said as soon as I got off the bike, that we should talk to each other to define a bit what will be the next races," he added. 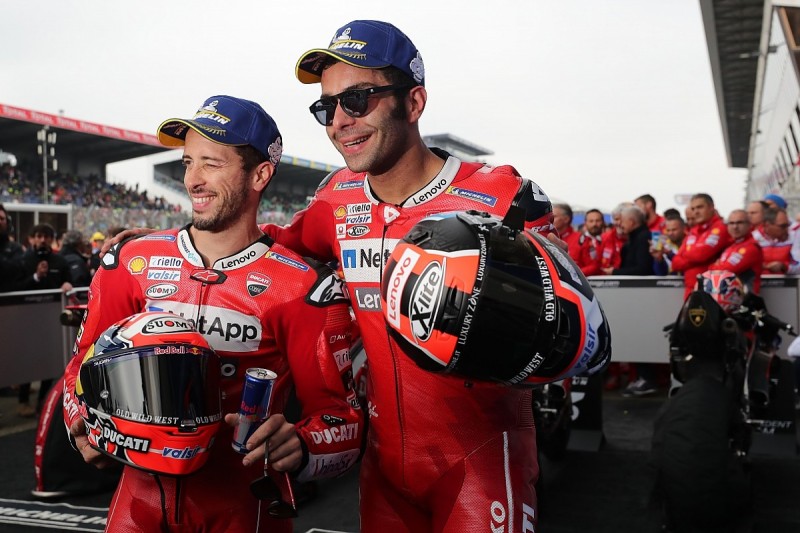 Dovizioso said he and Petrucci have been working "intelligently" and felt that is reflected by the teams' championship standings, which Ducati leads by 45 points.

"As I attack him, he attacks me - at Le Mans and even today. But there is no need to attack by swinging, you can also fight intelligently.

"If you look at how many points we've scored compared to the other official teams, we're the strongest in the mix, so it means we're working well.

"Unfortunately in some races we are not able to fight there in front."

Yamaha's Vinales: A lot of pressure went out after Assen MotoGP win