KTM's maiden MotoGP chassis has impressed 2017 recruit Bradley Smith, who found "nothing mysterious" during his first test at Valencia

Having spent his first four seasons in MotoGP on Tech3-run Yamahas, Smith is moving to newcomer KTM next year, followed by his Tech3 team-mate Pol Espargaro.

After KTM test rider Mika Kallio raced in the Valencia season finale as a wildcard, Smith and Espargaro got their first tastes of the RC16 during last week's post-season test.

Espargaro was the quickest KTM over the two days in 17th place, 1.878 seconds off the pace set by Maverick Vinales.

While Smith found the engine confusing initially, he had no such troubles with KTM's steel trellis frame - which differs from the aluminium chassis favoured by other manufacturers.

"It has some great points," he said.

"The steel chassis gives some great feedback. You understand where the front and rear tyres are 100%.

"WP suspension is giving really good feedback to my hands. There is nothing mysterious.

"I know where the bike is at all times so that's something that's good for the direction in the future.

"It seems logical. The bike reacts to logical changes and I can feel it straight away.

"It's not like you have to make a big step to feel it. Even a small step you feel, so that's nice."

KTM is testing again at Jerez this week with Smith and Kallio, while Espargaro remains under contract with Yamaha until the end of the calendar year and is not permitted to take part. 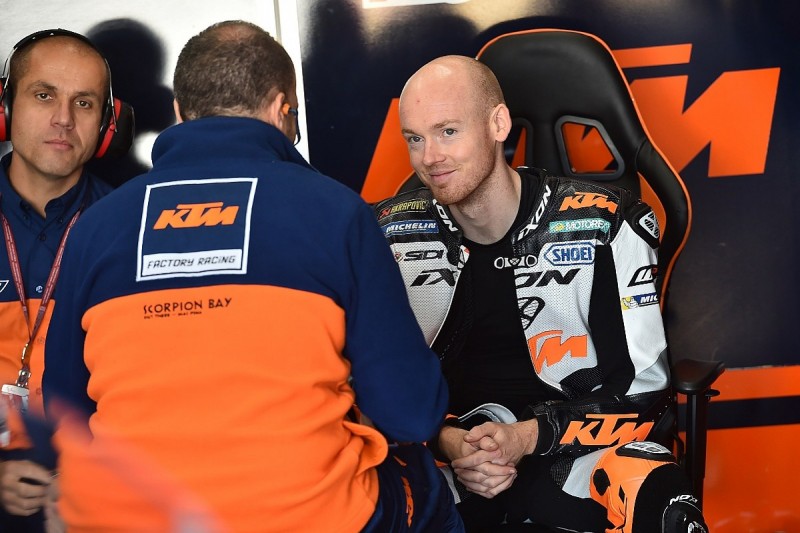 Smith was impressed by his first few days with his new employer, and encouraged by life as a factory rider.

"The biggest thing is I really enjoy working with people that understand and can implement what I'm trying to achieve," he said.

"When you speak to people they don't look at you with a blank face. They can actually change things and improve things.

"We're at the beginning of our working process, but I believe what we've achieved [at Valencia] has been very good."

Smith missed three races in the second half of the season after injuring his right knee in a crash during practice for the Oschersleben 8 Hours in August.

He returned at Motegi for the final month of races, and believes it will be about another month before his knee is 100% again, well before the first 2017 pre-season test at Sepang from January 30.

"The biggest problem is the flexing, being able to get your body off and knee in the right position and have the power in that position as well," Smith said.

"MotoGP is not easy for your knee. For everyday life it's getting better.

"I still can't run. I can cycle. For riding at this elite level, it's not perfect."