Squeezed out of Ducati to accommodate Jorge Lorenzo, Iannone has moved to Suzuki to ride the GSX-RR that became a race winner in 2016 with Maverick Vinales.

Suzuki made major progress in its second season back in MotoGP, recovering from a major power deficit in 2015, and its chassis is highly regarded in the paddock.

Iannone got his first taste of it last Tuesday and Wednesday at Valencia, and liked what he found, in setting the seventh and then fourth-fastest times.

"The bike is very fast inside the corner, we have high speed, and this is a good point for me," he said.

"I have a very good impression about the bike, I'm happy.

"We worked a lot on the second day, we understood a lot in some areas, because we got the information.

"This is very important, because the bike is a very good base, we have a very good chassis.

"The feeling with the bike is very good, but it's normal we have some parts, some areas not at 100%.

"I'm happy also with this, because we have a point to improve."

The Italian crashed at Turn 12 one hour into the second day, 15 minutes after rookie team-mate Alex Rins went down at the same corner. 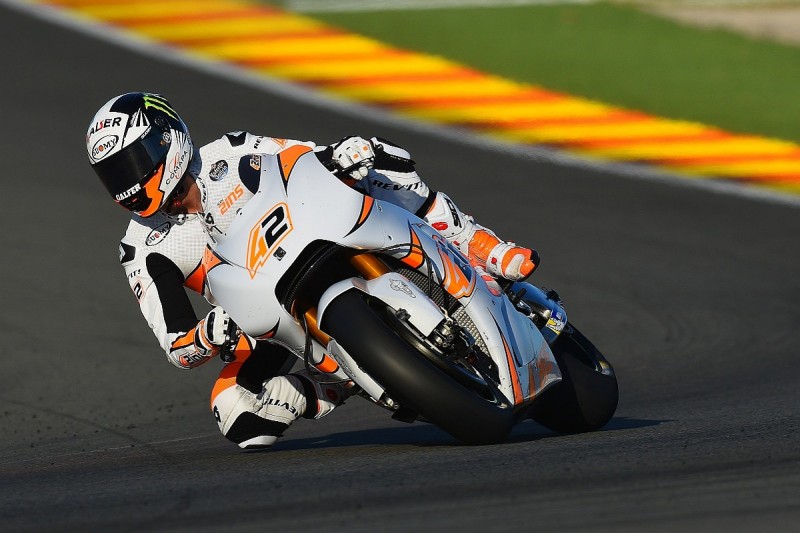 Iannone was able to rejoin the session albeit not riding at 100% due to right-elbow pain, while Rins suffered two compressed vertebrae.

Suzuki has been limited by rear-grip in warm and/or wet conditions this year, and arriving from arguably the best-accelerating bike on the grid at Ducati, Iannone feels that is an area where gains can be made.

"It's very important to improve the first part of acceleration, especially in second and third gear," he said.

"The engine has good power, but in the first part of the acceleration it's a little bit difficult, to use at 100%."

Rins has left hospital but will miss this week's Jerez test, in which Iannone will be back on the bike from Wednesday to Friday before the winter ban starts.

"These two days have been positive because his feeling in general about our machine is better than my concerns, and we could already clearly find which areas we have to work on to improve," Suzuki's technical manager Ken Kawauchi said.

"He proved to be a very fast rider, we already knew it, but it's good to find a confirmation in this."