The Italian rookie has shown flashes of speed throughout 2022, guiding his 2021-spec Ducati to the front row in a wet/dry qualifying at Mugello and taking a maiden podium at Assen prior to the summer break.

In a tight qualifying at Buriram, Bezzecchi smashed the existing lap record to claim his first pole in the premier class with a 1m29.671s.

The 15-minute pole shootout session got underway in dry conditions with Bezzecchi’s VR46 team-mate Luca Marini setting the reference lap with a 1m31.747s.

That only stood as the fastest lap for a few seconds as Jack Miller shot to the top of the order with a 1m30.270s, which he bettered moments later with a 1m30.106s.

The Motegi race winner was unable to complete the session, however, as an issue on the rear of his Ducati as he exited his garage for his second run in the closing stages forced him back into his box.

Team-mate Francesco Bagnaia was only ninth at the end of the opening run, with Pramac’s Jorge Martin leading the way after posting a 1m29.893s moments after Miller had gone top.

When he returned to the circuit for his second run on fresh soft rubber, Bagnaia – who goes into Sunday’s race 18 points behind championship leader Fabio Quartararo – deposed Martin with a 1m29.775s.

This was good enough to keep him second when Martin returned to the top of the order with a 1m29.692s to dip underneath the outright lap record.

Behind him, Bezzecchi was just 0.041s adrift as the VR46 rider came through the third of four sectors.

Crossing the line with a 1m29.671s, Bezzzecchi shot to the top of the order – though had a nervous few minutes' wait as Martin clicked through the second sector fastest of all.

But the Pramac rider couldn’t hold the lap together, with Bezzecchi clinging onto his maiden pole.

Bagnaia completed the front row, with championship leader Quartararo fourth with a 1m29.909s on the factory Yamaha ahead of fellow Frenchman Johann Zarco on the second Pramac Ducati.

Gresini’s Enea Bastianini completed the second row in sixth, with Miller left in seventh after his later issues. 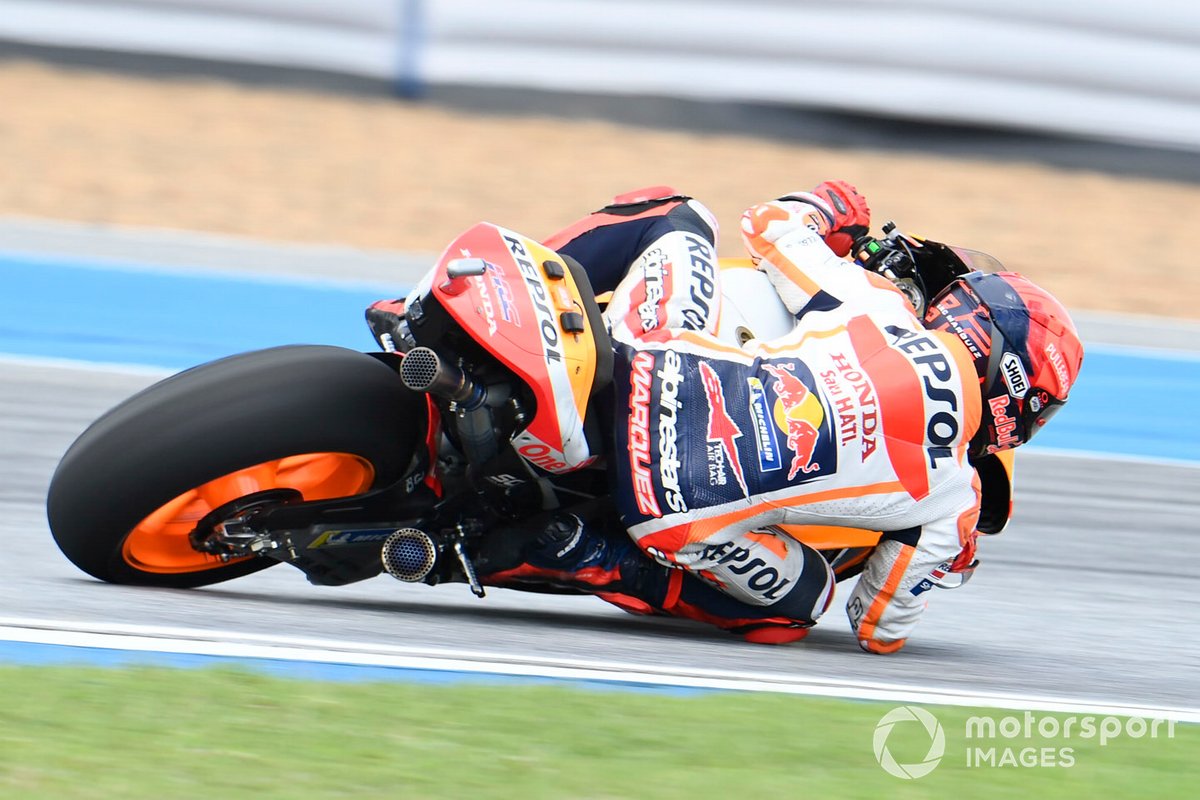 Marc Marquez topped the Q1 session and began Q2 on a used soft tyre, which put him sixth when he boxed for his second run.

Quick across his final lap, the Honda rider lost the rear on the way into the last corner and ended up eighth as a result with a 1m30.133s.

The big shock of qualifying came in the form of third-in-the-championship Aleix Espargaro, whose grip woes at Buriram continued in Q1.

The Aprilia rider could only managed 13th on the grid having missed the Q2 cut by 0.103s, with Espargaro’s title hopes in trouble heading into the race given he starts 25 points adrift of Quartararo.

Franco Morbidelli was 14th on the second factory Yamaha ahead of a hobbled Cal Crutchlow on the RNF Racing Yamaha, while Raul Fernandez (Tech3 KTM), Maverick Vinales on the Aprilia, Remy Gardner on the Tech3 KTM, Honda’s Pol Espargaro and Alex Marquez (LCR Honda) followed next.

Danilo Petrucci will start last on his comeback race standing in for Joan Mir at Suzuki, though was only three tenths from RNF’s Darryn Binder, who shadowed LCR stand-in Tetsuta Nagashima and Gresini’s Fabio Di Giannantonio.