Andrea Dovizioso scored his and Ducati's third win of the MotoGP season at the Red Bull Ring, seeing off Honda's Marc Marquez after a tense head-to-head duel

The pair emerged as the leading contenders for victory after a frantic start to the Austrian Grand Prix, with Dovizioso ultimately prevailing by 0.176 seconds despite a desperate last-corner lunge from Marquez.

Marquez converted his pole position into a lead at the start, but the reigning champion had no answer to the straightline speed of Jorge Lorenzo's Ducati.

Lorenzo cleared team-mate Dovizioso at Turn 1 and passed Marquez on the next straight, assuming control of the race.

As Marquez fended off Dovizioso, Lorenzo extended an early lead of a second, but was soon reeled in by Marquez when the order stabilised.

Marquez was close enough to challenge for the lead by the eighth lap, but as he ran wide in Lorenzo's wheeltracks into the Remus right-hander at the top of the hill, Dovizioso relegated him to third.

That proved only a temporary setback though as Marquez quickly reclaimed second before forcing compatriot Lorenzo wide at Remus.

Dovizioso made it three-wide for the lead on the following straight and was briefly ahead at Turn 4, but subsequently ran wide and handed first back to Marquez. 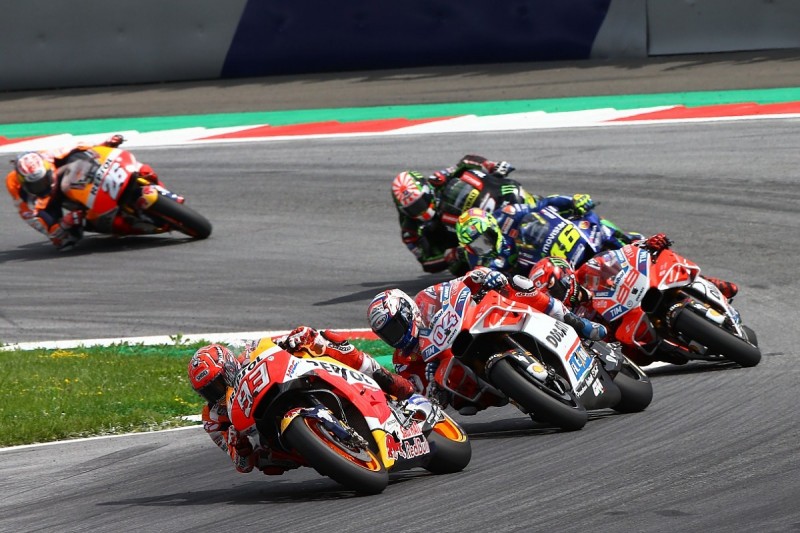 Lorenzo faded thereafter, but Dovizioso managed to stick within a couple of tenths of Marquez and coasted past again when the reigning champion erred at Remus on lap 18 of 28.

Marquez retook the spot shortly thereafter at Turn 7, but again couldn't shake Dovizioso - who slipstreamed past on the main straight with seven laps to go.

The pair traded the lead several times on that lap, with Marquez unable to make a move stick and easing the pressure on the Ducati for a few laps afterwards.

With Dovizioso repeatedly blocking off Marquez's favoured overtaking spot - Turn 7 - in the final minutes, their battle came down to the very last corner of the last lap.

Marquez lunged down the inside of the Italian, forcing both wide, but Dovizioso managed a better exit and clung on to win.

The podium was completed by Marquez's team-mate Dani Pedrosa, who fought his way through the pack and picked off Valentino Rossi and Johann Zarco in one move before finding his way past Lorenzo.

The Marquez-Dovizioso duel briefly allowed Pedrosa to join the scrap, but he was unable to maintain that pace and finished 2.485s off. 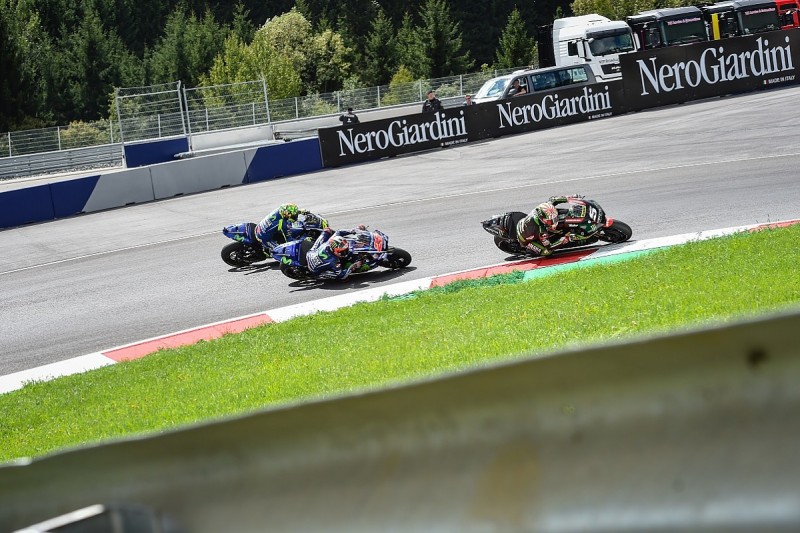 Lorenzo held on to fourth from Tech3's Zarco and the Yamaha works pair of Maverick Vinales and Rossi, whose both had costly off-track excursions at Turn 1.

The other KTMs did not pick up any points, with Pol Espargaro ruled out early after a startline collision.

Petrucci was another to retire, with he and Tech3 Yamaha rider Jonas Folger returning early to the pits, while Marc VDS Honda's Jack Miller crashed out at Turn 9.