Dovizioso and Honda rider Marquez were locked in a head-to-head scrap for victory for much of the Red Bull Ring race, with Dovizioso taking the lead with seven laps remaining.

The pair ran line astern as they entered the final sequence of bends on the final lap, with Marquez trying a move around the outside exiting Turn 9 before barging past into the final corner.

The Spaniard narrowly avoided the Ducati rider as he ran out wide, and Dovizioso signalled his dissatisfaction at the move as he crossed the line.

"To win in the last corner is always different and special with Marc, because he is really good in the battle," said a reflective Dovizioso.

"But I had a strange feeling in the last corner, I was more angry than happy because he tried to overtake me in that way.

"I did this [gesture] instinctively, because that is not a corner to try to overtake a rider.

Dovizioso - who is now second in the points standings, 16 behind Marquez - said he could hear Marquez's engine through the final corners, which allowed him to anticipate the move.

"The last lap was very difficult for me, because I lose a lot in the two left corners, and it was easy for him to overtake me," he said.

"I didn't know he wasn't very close, so I closed the door and he caught me again.

"He had a chance to try in the last two corners, but the corner before last I braked very late and it was difficult for him.

"[At first] I didn't expect he'd try to overtake me because there's no space there, there's not a braking [zone].

"But I heard his engine - the corner before the last, he was allowed to open the throttle before me because he prepared the corner better than me, so I knew he wanted to try [to overtake.

"So I left the door open to try to exit faster."

Marquez 'forgot about the championship' during last-lap lunge 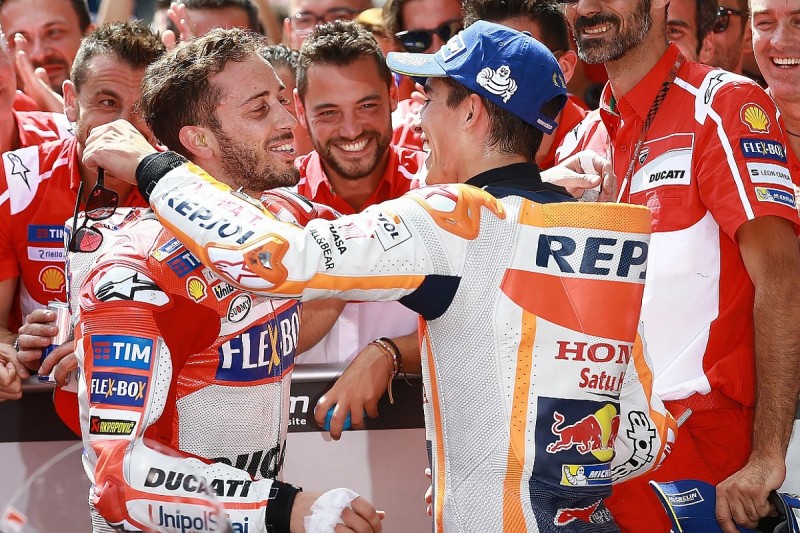 Points leader Marquez said he threw caution to the wind while attempting the final corner move on Dovizioso.

"On the last lap I was thinking about everything; the championship, I forgot a little bit," Marquez said.

"I decided to go all-in because I knew victory was very important - but even a second place is important. Last year we struggled a lot here and this year we were much closer to the Ducatis.

"I arrived on the limit and I tried [to overtake] on the last corner, because if not, I cannot go to sleep [tonight], I have to try."