The Italian dethroned former team-mate Andrea Dovizioso from top spot by 0.041 seconds in the final half hour of the session, courtesy of a 1m54.586s lap.

The daytime heat early in the session is not expected to be representative of the conditions MotoGP teams experience at the first round of the season at the same venue later this month, and as a result there was a sluggish start to the day's proceedings.

Ducati works rider Jorge Lorenzo was the only rider to attempt any meaningful running in the first two hours of the session, while the third hour was then largely chalked off when rain arrived.

The culprits were three privateer riders - Pramac Ducati pair Danilo Petrucci and Jack Miller, as well as Tech3 Yamaha's Johann Zarco - all going down at Turn 1.

Iannone took over out front once the session resumed, before Dovizioso reclaimed the spot with a 1m54.734s effort - the first sub-1m55s lap of the test.

An hour after that, the Ducati man improved to a 1m54.627s, which remained the time to beat until Iannone's late effort.

Reigning champion Marquez crashed with an hour left while running a new Honda aero fairing, but soon rejoined to post a lap time that proved enough for third place. 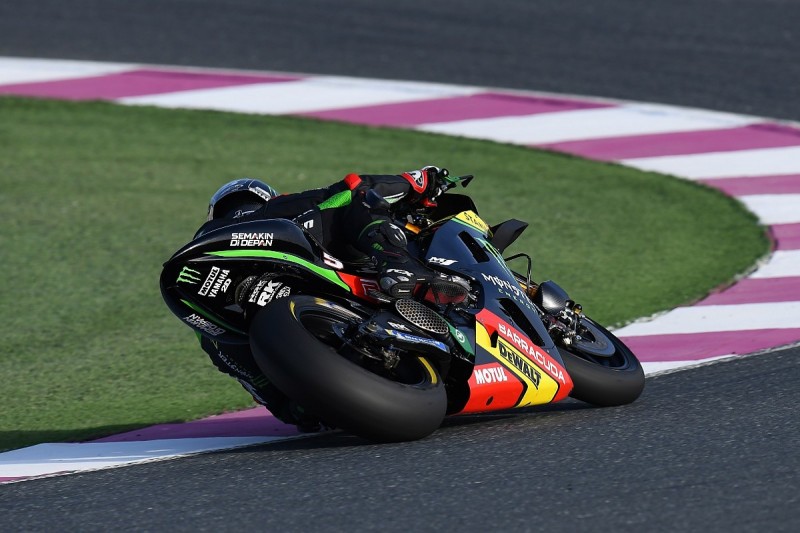 Zarco was the top Yamaha rider in fourth, ahead of Iannone's Suzuki team-mate Alex Rins and LCR rider Crutchlow.

The top six had all improved on Maverick Vinales' opening-day benchmark, and the Yamaha rider did so to - albeit by a mere 0.002s, which left him only seventh in the order.

Pramac duo Petrucci and Miller were eighth and ninth, while Honda's Dani Pedrosa completed the top 10 just ahead of Yamaha's Valentino Rossi.

Aprilia's Aleix Espargaro, LCR Honda's Takaaki Nakagami and Lorenzo were the only other riders to lap within a second of Iannone.

Bradley Smith was the leading KTM runner in 16th, as his regular team-mate Pol Espargaro, continuing his recovery from injury, sat out the running in favour of test rider Mika Kallio.

Saturday's session will mark the end of MotoGP pre-season testing, and will conclude with a compulsory half-hour wet test, aimed at studying the impact that spray kicked up by the bikes could have on visibility around the Losail International Circuit at night.