Jorge Lorenzo said a new chassis, based on the 2017 Ducati MotoGP bike, tested on Thursday in Qatar "didn't work"

Lorenzo, who is seeking a frame with a "mix" of the 2017 and '18 Ducatis' attributes, spent the final day of the last test in Thailand comparing last year's Desmosedici with the GP18 having struggled for pace on the new bike.

Ducati created a 2017-based solution that Lorenzo trialled at Losail on Thursday.

But the new chassis proved to be a step in the wrong direction, and Lorenzo has since opted to stick with the frame he set an unofficial Sepang lap record with in January.

Lorenzo, who was fifth fastest on day one of the Qatar test, said: "Here we have some chassis to try to simulate the performance of the 2017 [bike], but they didn't work.

"So it's going to be complicated to make a mix between the engine and the chassis.

"So for the moment, we are concentrating and focused on the new bike, and I think we have some margin to improve."

Lorenzo admits he did not alter the set-up of his bike radically after the difficult Thailand test, and thinks the change of circuit has been the biggest factor in his sudden upturn in form; though he concedes he is struggling somewhat in cooler temperatures. 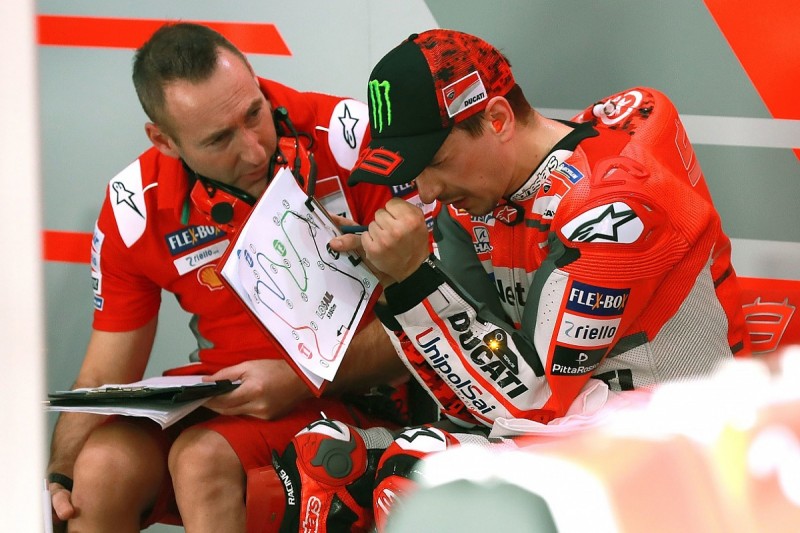 "I could be very good from the beginning [of the session], with good pace to the last hour," he said.

"The temperature of the track went low, and [with] the more humidity I didn't have the same feeling.

"We need to understand why, so we change the tyres and everything changes, all the feelings change.

"But, till the last hour I was very competitive, and I led the classification for a few hours. So I feel much better now."

Team-mate Andrea Dovizioso - who was 0.051 seconds behind Thursday pacesetter Maverick Vinales - feels the GP18 is "even better" than last year's bike, and says the laptime is "coming quite easy" in Qatar.

"I'm happy, I have a really good feeling, even better than last year," he said.

"We already improved the bike from last year a little bit in Malaysia with the new bike, it was a little bit better.

"We are still working with the new chassis and new fairing. I'm happy with the way the Ducati works until now. Still we have to take a decision about the base for the first round."