Ducati rider Andrea Dovizioso is a clear favourite for the MotoGP opener in Qatar despite qualifying fifth, according to his rivals

Dovizioso, who has finished second in Qatar for three years straight, topped first and second practice and the shorter FP4 session in the lead-up to qualifying, and held provisional pole after the first runs in Q2.

He failed to improve on his second run, however, and was shuffled down to fifth by the time the session ended.

But while Sunday's race at Losail is expected to be closely-fought and feature plenty of slipstreaming, several frontrunning riders have tipped Dovizioso to win.

"By the end of the first lap, he can pass two on the first straight. Easy."

Pramac Ducati's Danilo Petrucci, who will start behind Johann Zarco and Marc Marquez on the front row, said that pair were likely to be part of a lead group in the race but suggested Dovizioso may have the edge over the rest.

"Dovizioso I think is the stronger one because he is able to manage the tyres until the end," Petrucci said.

"Dovi has got a little bit more in this moment in managing the tyre."

Marquez reckoned Dovizioso and Petrucci were "a little bit faster" than everyone in race pace simulations in FP4.

"I think the fastest guy is Andrea," he said. "He has a very good pace and he is favourite for the race." 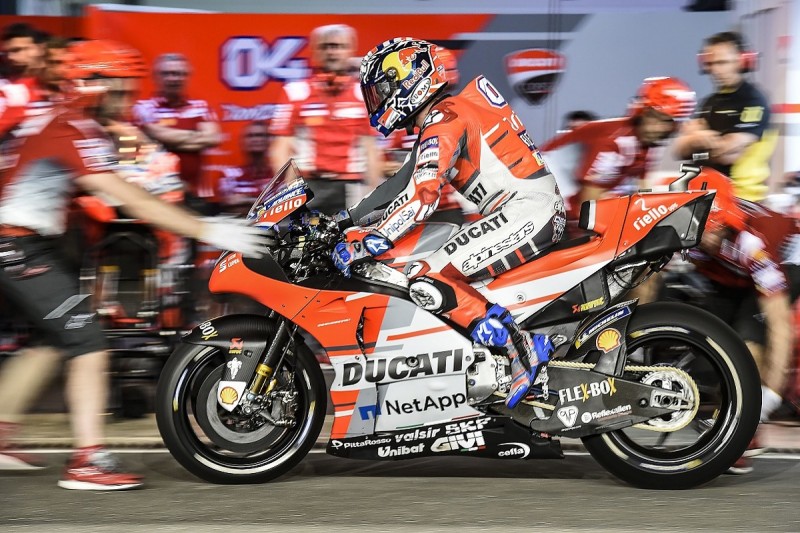 Asked about his favourite status after qualifying, Dovizioso said he was in the dark about the pace his rivals would be capable of in the race.

"I had a good feeling in free practice four, we confirmed a good speed - but it's very difficult to understand the pace of the competitors for the 22 laps [race distance]," he said.

"In qualifying unfortunately I didn't make a really good lap time. On the second tyre I slowed down because a lot of riders slowed down, and I didn't prepare perfectly [for] the last lap.

"The second row is OK, we go in the race with a good feeling, but we can't know how [the race] will be tomorrow, with conditions.

"Today it was very windy, it's not so easy to ride the bike like this."