The reigning champion was thrown from his M1 at Turn 2 during the third practice session, flying through the air and landing heavily on the left side of his body on the asphalt run-off area.

Lorenzo got up gingerly, then left the scene on a stretcher, and ultimately arrived at the medical centre on the back of a scooter.

After initial checks, he was taken to the nearby Utsonomiya Hospital for further inspection and after getting the all clear was back in time for fourth practice and qualifying.

The Spaniard got through those sessions and qualified on the front row, but still sported a limp and ice on his left calf when he attended the post-qualifying press conference.

"It's been a long time that I didn't have a crash like today, flying a lot of metres in the air and touching the ground very hard," he said.

"I was scared at the beginning, all of my body was hurting. I expected the worst, especially in the left leg.

"It was just a big impact, on the whole body, but especially in this leg.

"As a precaution we went to the hospital and there they checked my body and we came back to the track for FP4.

"It was much better than I expected, the bike was working well and I was faster and faster every lap.

"I was really surprised about that and I was ready to fight for pole position, but the lap times from Marc [Marquez] and [Valentino] Rossi were very fast." 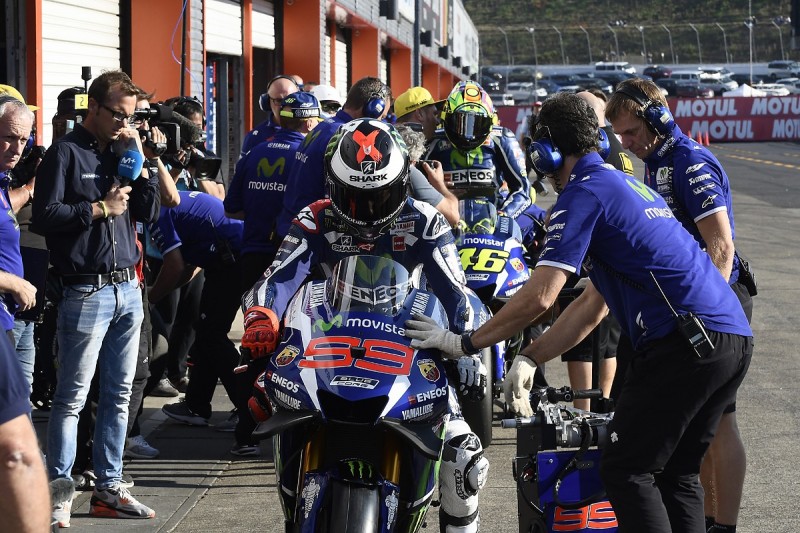 Lorenzo snatched the final place on the front row from Ducati's Andrea Dovizoso with his last lap, qualifying 0.267 seconds behind polesitter and team-mate Rossi.

A three-time Motegi winner, Lorenzo said his condition actually improved when he got on track, after his return from hospital, and he is confident that he will be fine for Sunday's 24-lap race.

"When I touched the ground again after coming back on the helicopter, I had a lot of pain," he said. "I couldn't walk very well.

"But with painkillers and the adrenaline of qualifying, I felt an improvement and on the bike I forgot about the crash and the injury and I rode well and with power.

"So I should be OK for tomorrow."