MotoGP Argentina: Miller 'a passenger' over wet track on slicks

Pramac Ducati rider Miller gambled on a switch to a slick tyre-shod bike after the first runs in the pole shootout at the Autodromo Termas de Rio Hondo circuit during the wet-to-dry session.

This meant he came close to crashing each time he went through a particularly wet patch of the track at the double right-hander of Turns 7 and 8.

But Miller persevered and snatched pole at the chequered flag.

When asked to elaborate on how he managed stay on the bike through the wet sections, Miller said: "It wasn't me. I was just hanging on.

"I mean, [in] this moment, I was a passenger. When you're on wet with slick tyres, anything you do, you've just got to hang on and hope to God you make it to the other side.

"And that was all I was doing in this section."

Miller insisted the rest of the track was "quite easy" to navigate on slicks, although he explained that he had to be careful going over the seams in the asphalt at the final corner.

"My mother always said I never listen," Miller joked when asked why he didn't back out of his gamble after nearly crashing.

"And I guess that was the bike telling me something and I just wasn't listening.

"I knew if I could survive that one corner, the rest of the track was more or less dry.

"I just had to try and make up as much time as I could in the first two sectors, sacrifice that one [corner].

"Then the last corner as well was more or less dry but you have to cross where they've sealed the track - between the two or three layers, each seam was wet.

"I was just in survival mode in those points.

"It was so slippery, you cannot explain how slippery it is in the puddles on slick tyres. [A] minute bit of gas and the thing was just going sideways." 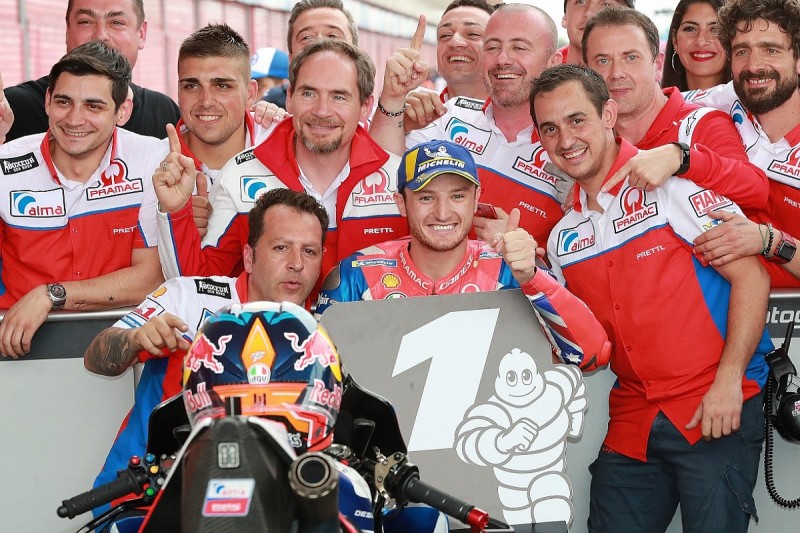 Miller added that he had kept Khairul Idham Pawi's 2016 Moto3 win at the same venue in mind, as the Malaysian - who used slicks on a drying track to win by 26 seconds that year - demonstrated "how much grip the track had in the wet".

The Australian rider also claimed he took inspiration from the second race of the recent British Superbike opener at a drying Donington Park.

"I felt it was a calculated risk that I took," Miller said.

"For me, I was watching BSB last weekend, and I saw those guys in the second race [on slicks] with the three degrees ground temperature, with the dry line maybe 30cm wide, and they were pushing like a hell.

"And I mean, we had some good ground temperature today, so I thought - why not?"