Vinales led home local hero Cal Crutchlow by 3.480 seconds to become the fourth new winner in five grands prix and end a Suzuki drought that goes back to Chris Vermeulen's victory in the 2007 French GP at a wet Le Mans.

The race was red-flagged on the first lap, due to an accident involving Pol Espargaro and Loris Baz at Maggotts.

With their bikes, the pair bounced across the infield and were fortunate not to be hit when they re-entered the track surface.

Both were taken to the medical centre for further checks. They have since been cleared of serious injuries and are expected to race at Misano next weekend.

Vinales took the lead into Maggotts on that first start, and after the restart for the shortened 19-lap race he had to wait until Abbey on the opening lap to get past polesitter Crutchlow.

But once he was in the lead, Vinales strolled away at the front as a five-rider scrap for second developed behind him.

Having initially broken away from the pack by two seconds while Crutchlow and Valentino Rossi struggled to pass Marc Marquez, Vinales led by three seconds with 10 laps to go and his lead got out to nearly five seconds before he started cruising home. 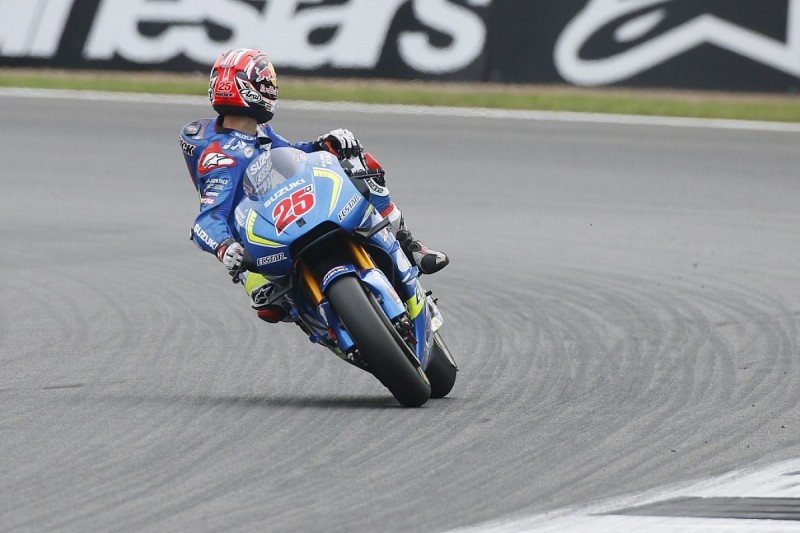 Behind Vinales, Rossi moved past Crutchlow at Brooklands on lap five and then Marquez on Hangar Straight a lap later, but he could not eat into Vinales' lead.

And he could also not pull away from the riders behind, namely Crutchlow, Marquez, Dani Pedrosa and Andrea Iannone.

The big mover was Iannone, who cut his way through the pack and up into second place, before he crashed his Ducati at Luffield on lap 14.

At the same time, Marquez and Rossi were in a fierce battle, trading what became third place and - nearly - paint, until Marquez eventually got past the Yamaha rider with five laps to go.

Marquez then reeled in Crutchlow, and they too traded second, until Marquez had a big look up the inside at Stowe but overshot the corner with two laps remaining.

That meant polesitter Crutchlow finished second for LCR Honda, his first home podium coming a fortnight after his breakthrough MotoGP victory, while Rossi was third.

Marquez dropped to fifth but repassed Honda team-mate Pedrosa to take fourth, while Andrea Dovizioso was sixth, ahead of the second Suzuki of Aleix Espargaro. 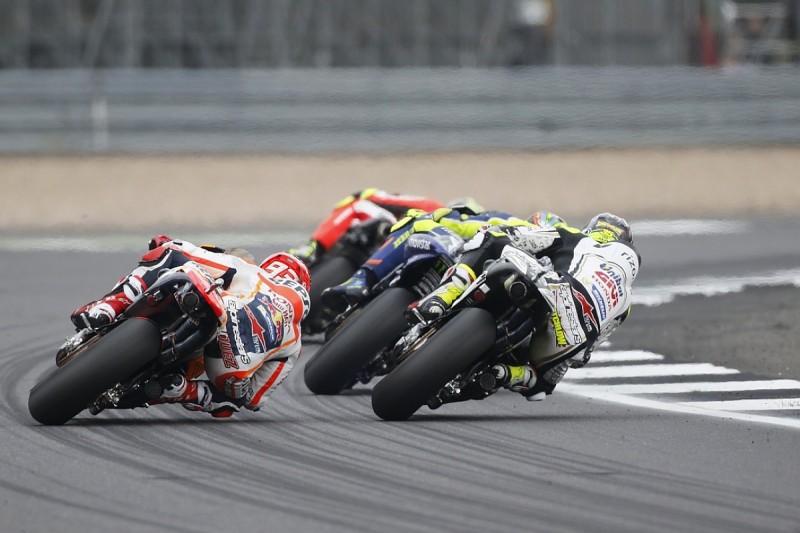 With the results - and Jorge Lorenzo finishing a distant eighth, nearly 20 seconds behind Vinales - Marquez leaves with a 50-point championship lead over Rossi, with Lorenzo a further 14 behind.

The points leader was one of the biggest beneficiaries of the race stoppage, having dropped to 11th when it was shown after a light touch with Scott Redding moments after the start.

Eugene Laverty charged from sixth on the grid up to second before the red flag, but couldn't repeat his heroics at the restart and eventually finished 12th, after appearing to be tagged by Stefan Bradl when the Aprilia rider crashed at Maggotts.

Redding had a miserable home race, falling twice - once at Vale and then again at Village - and was the last of the classified runners in 17th.

The other local rider in the field, debutant Alex Lowes finished 13th for Tech3 Yamaha standing in for the injured Bradley Smith.