Vinales began the weekend with the fastest time in first practice and was then second in the remaining two dry sessions, before claiming third on the grid in a wet qualifying session.

That grid position combined with the Spaniard's strong form on his Suzuki at Silverstone means he is perceived to have a strong chance to score his maiden victory in Sunday's race.

Asked if he agreed with the opinion that he is the favourite to win, Vinales said: "At least on paper it looks like that.

"In the race you never know, but what I know is that I feel very strong on this track.

"The bike is working really good all the time, I have confidence in the front which is so important for this track.

"So we are ready to fight until the end. If I have the chance, I will take it."

Vinales explained that Suzuki's strength at high speed and in quick changes of direction has helped it to shine at Silverstone, while also saying that progress has been made under acceleration. 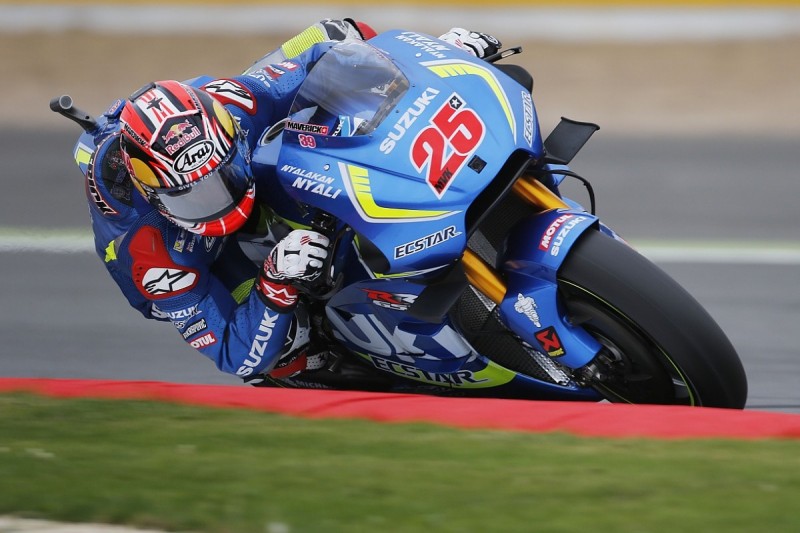 He added that tyre management would be critical in the race.

"Our bike is really good in the fast corners," he said.

"In Brno we worked a lot on acceleration. Here we are still working and we are improving day by day.

"It's important to have control of the tyres because tomorrow is going to be a difficult race.

"At the end of the race the tyres are going to be really down and we need to be intelligent on that."

Having been nearly four seconds off the pace in the weekend's first wet running in the fourth practice session, Vinales thanked the team for the improvements prior to qualifying that enabled him to take third on the grid with his final effort in worsening conditions.

"After FP4 I couldn't imagine that I could be there in the front row," he said.

"I need to say thanks to the team because they did awesome work in just half an hour, to give me a bike that I could push.

"The last lap was incredible. I was already sideways in the first corner. I tried to finish the lap as best as I could."