Errors that stifled Valentino Rossi's 2016 MotoGP title bid made him play it safe late in the Malaysian Grand Prix, rather than trying to fight Andrea Dovizioso

Rossi battled the Ducatis of Dovizioso and Andrea Iannone for the bulk of the Sepang race, leading from lap 11 to 14 after taking the lead from Iannone.

When Iannone joined Cal Crutchlow and Marc Marquez in crashing in the space of two laps, the race was down to a straight fight between Rossi and Dovizioso with five laps remaining.

But an error from Rossi at Turn 1 handed the lead to Dovizioso, and with the Yamaha rider struggling with his front tyre as the circuit dried, Rossi elected not to push to go with the eventual winner.

The 37-year-old has crashed out of three races this year, at Austin, Assen - while leading Dovizioso in the rain - and Motegi, where Marquez secured his third MotoGP title.

"After I had the hard fight with Iannone, it was very difficult," Rossi said.

"I wanted to try to go in front, especially because my gloves were completely wet behind him and I could not keep [on] the throttle, but Iannone every time overtook me back.

"When I was able to overtake, I felt good and I took a small advantage and in that moment I was optimistic for the victory, but with less water I started to suffer very much with the tyres, especially at the front.

"I made a small mistake, but especially I didn't have the pace like Andrea, he was faster.

"I had two moments and I didn't want to crash and throw away 20 points another time.

"It's a shame because I wanted to try to win, but it's a good second place." 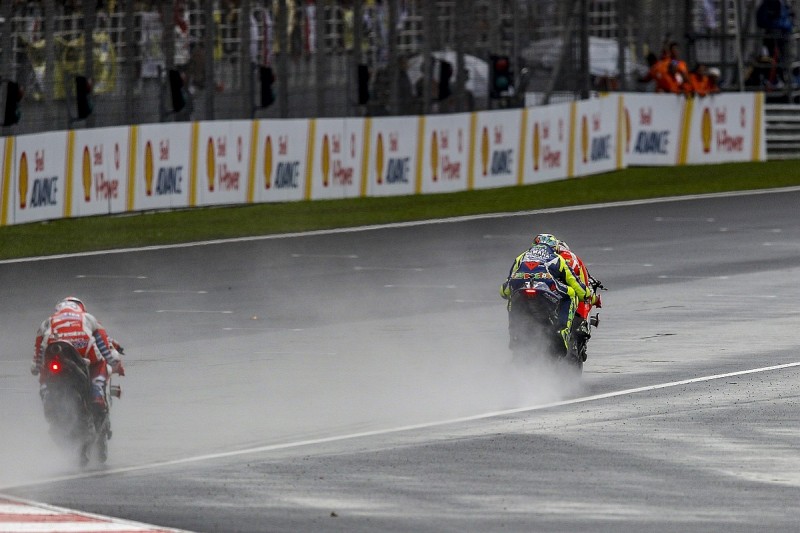 With the result, Rossi achieved what he classed as his "main target", beating Jorge Lorenzo to second in the championship in their final season as Yamaha team-mates.

Lorenzo also finished on the podium, in third place, but Rossi is now an unassailable 28 points clear with just the Valencia finale remaining.

"At the end it's a good result," Rossi said.

"I'm quite happy, when you have the chance to close these things you have to try.

"If I made a mistake today, Jorge finishes second, he gains 20 points on me and we arrive at Valencia with [a lead of] just four.

"And Jorge in Valencia is always very fast. So it's OK like this."