Andrea Dovizioso believes it was important to win for Ducati this season, after being beaten by team-mate Andrea Iannone to break the squad's MotoGP drought

Ducati started the season having not won a race since Casey Stoner's victory in the 2010 Australian Grand Prix, and had several near misses during the first half of the campaign.

The Italian outfit was the raging favourite to win the Austrian Grand Prix at the Red Bull Ring in August, but Dovizioso had to settle for second behind Iannone, who successfully gambled on softer tyres.

In the second last race before Jorge Lorenzo arrives from Yamaha to replace Iannone, Dovizioso claimed his first victory for Ducati at Sepang on Sunday.

"In Austria, the thing was that that victory was mine," he said.

"I made the wrong decision with the rear tyre [in the race], I was very disappointed at that time.

"That weekend I rode I think in a perfect way.

"To get a result now, this year, at the end of the season, is very important." 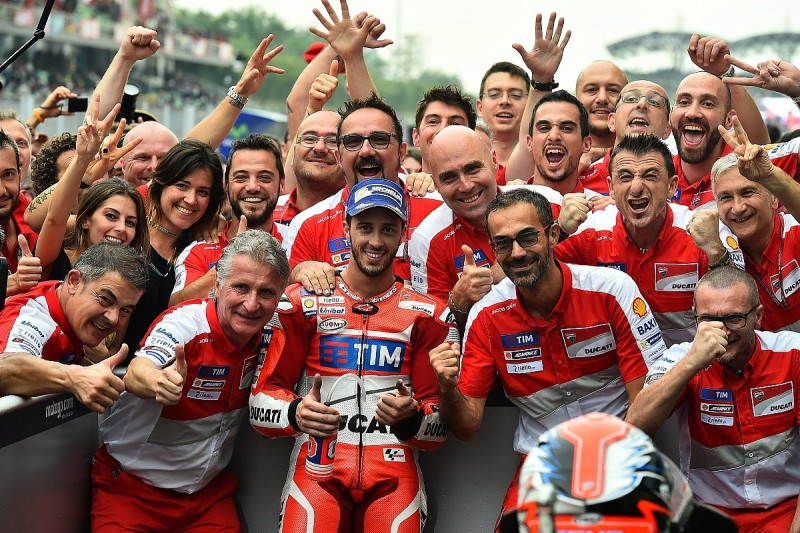 The victory was Dovizioso's second in MotoGP, his first having come during his stint as a factory Honda rider in the 2009 British Grand Prix at Donington Park.

Dovizioso finished on the podium 31 times between that first victory and his second, and believes his fresh triumph is the best moment in his career, having joined a struggling Ducati in 2013.

"We can't forget four years ago, it was very bad, our situation," he said.

"Now we are in a completely different situation, we can speak about the dry and fight for the podium in many races. I'm proud about that.

"I think I am in the best moment, I think I can improve in many areas.

"I am 30 years old, but my style, my character, is not to go everything on the first race, in one lap, it's step by step.

"So the relationship I have with Ducati becomes very important, they believe in me.

"That's why I am the Ducati rider for next year, and I believe in them.

"To get this result for Ducati, everybody knows it's different and I'm really happy about that."