Lorenzo needs 'something different' to other Ducati MotoGP riders

Jorge Lorenzo needs "something different" compared to the other MotoGP riders on Ducati machinery, according to his factory team-mate Andrea Dovizioso

Lorenzo's first season after switching from Yamaha has been mixed, with one podium finish to his name so far as he sits seventh in the championship after 12 rounds, while Dovizioso leads the standings with four wins.

Spaniard Lorenzo has been enthused by the progress made since Ducati introduced its radical fairing design at Brno three races ago, which has given him a major increase in front-end grip.

While that comes with a straightline speed penalty due to drag, Lorenzo has been more prepared to pay that price than the other Ducati riders, and he was the only one to use the fairing last time out at high-speed Silverstone.

"It's not something strange," said Dovizioso of Lorenzo's different preferences, "we know very well what's happening.

"[The other Ducati riders] believed for this layout of the track it's better like this [without the fairing], but Jorge is a different story.

"He rides in a different way, and he needs something different than all the other Ducati riders at the moment.

"In Misano [testing prior to Silverstone] we worked on that, and we now have a lot of data about the difference of the fairing - it's quite clear." 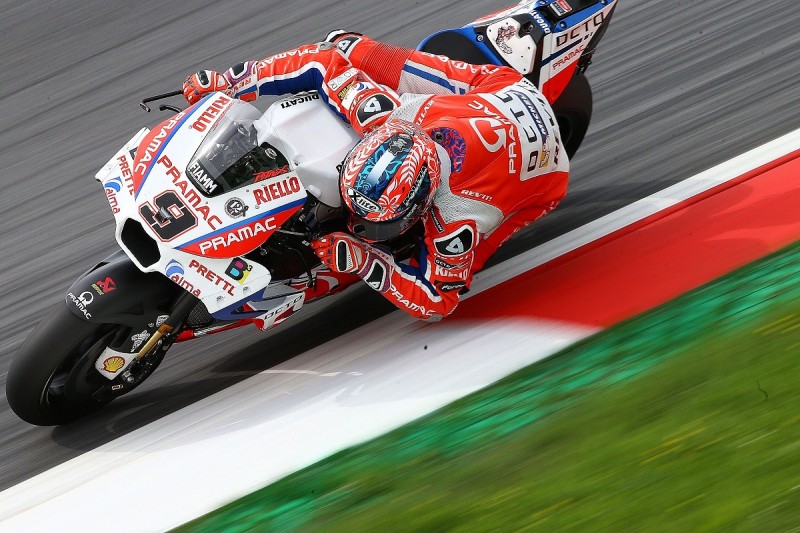 Pramac Ducati rider Danilo Petrucci has also had access to the new fairing, although he is less comfortable with it than Lorenzo.

"It's difficult for him because his body is huge," said Lorenzo.

"I'm sorry for him if it's a problem.

"For me it's OK, the wind is going onto your shoulders more, but as a riding style I always wanted more front contact than the rest, so for me it's better.

"It's true we are losing some kilometres on the straight, maybe five or six, but I am riding well compared to the other Ducatis.

"So we prefer to concentrate on this, keep the same fairing and improve ourselves to be better and improve the consistency over the laps."

Lorenzo described the test at Misano as the best he has had with Ducati, even if the day was not aimed at trying new parts.

"The bike didn't change, we just concentrated on trying all the tyres, trying to find a setting that permits us to start on Friday [mornings of GP weekends] with a good set-up," he said.

"I felt great from the beginning, very fast, very consistent, so it was very positive.

"It was probably the best test day of my career in Ducati, we tried to advance all the work with the settings, but we didn't try specially anything new."