The Austrian manufacturer will start its first full MotoGP campaign in Qatar next month, with Smith and former Tech3 Yamaha team-mate Pol Espargaro.

After a testing programme led by Mika Kallio in 2016, and a wildcard race start for the Finnish rider in the Valencia finale, Smith and Espargaro started testing KTM's RC16 last November.

Happy with what was the designated 2017 chassis and set to stick with it for the next test at Phillip Island, Smith said KTM's development push was proving successful.

"We had different parts to throw at it today, let's say we tried 10 parts and nine of them were better," he said on Wednesday.

"We don't always have those, and there will be times when it doesn't make a difference, or they don't make the improvements that we were looking for.

"But so far, clearly, the information that Pol and I are giving and the way the guys are interpreting that is working hand-in-hand and making us faster. Long may that continue.

"I felt that we made some clear improvements with the bike and myself and Pol worked in a similar direction today.

"With the same bike we're doing a similar lap time, which obviously helps with development.

"There are things we need to improve, but there are other things I've seen compared to other riders and other manufacturers that we're actually really strong at.

"I think we can take a lot of positives from the work that we've done, to only be 1.9 seconds off the fastest guy here, at Sepang - one of the longest tracks and our first test of 2017 - I think KTM's done a great job." 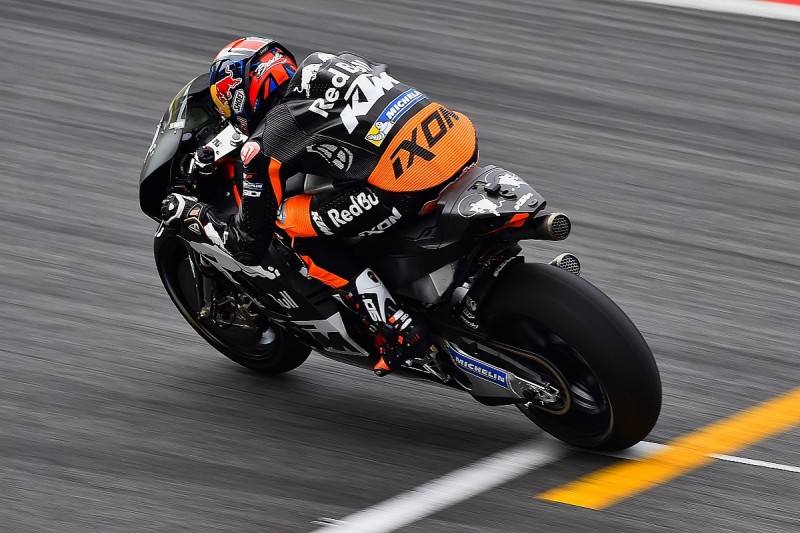 Smith and Espargaro finished the three days at Sepang 21st and 22nd in the order, with identical times of 2m01.338s set on the last and first days respectively.

The Briton said a straightline deficit at Sepang was an area KTM is already addressing.

"The long straights here are hindering us a little bit, so from an engine point of view, it's something that we need to continue to work on," he said.

"Being out there doing laps is critical, so we can turn up the speed when we need to. And it is free lap time.

"At the moment, working on straightline speed is not as important as working on the chassis, and with the chassis so far I'm really impressed with what we've done.

"I know we've got some stuff in our back pocket - when the right time and everything is clear to do so, we'll introduce it."