Jorge Lorenzo says his Sepang MotoGP test recovery was better than he could have expected, after the "shock" of struggling on his Ducati on the opening day

The three-time champion enjoyed a smooth start to his Ducati tenure in his maiden test at Valencia last November.

However, riding its updated 2017 Desmosedici, Lorenzo's first day at Sepang was significantly tougher as he languished in 17th place, 1.669 seconds off the pace set by Ducati test rider Casey Stoner.

Lorenzo managed to close to eighth place and 1.032s adrift on day two, and was within 0.399s of the Wednesday pace in ninth position.

"I am so happy, because all the team is supporting me and they are faithful even with the bad start on the first day," he said.

"They didn't lose the faith and finally we get it, even faster than we expected.

"So from 1.6s [behind] to three tenths is very good. We know we made a lap time with the hard rear tyre, we didn't use the soft one.

"We made a simulation, we took a lot of info for the engineers, and we know the weakest points we have to work on for the future.

"It was a big shock, the first day, and I said that maybe I needed more time than I expected.

"But finally [it took] two days, big improvement. I think we are still very far from our limit, but we are already fast.

"Which means when we get it, we will be very fast, or at least this is what I expect." 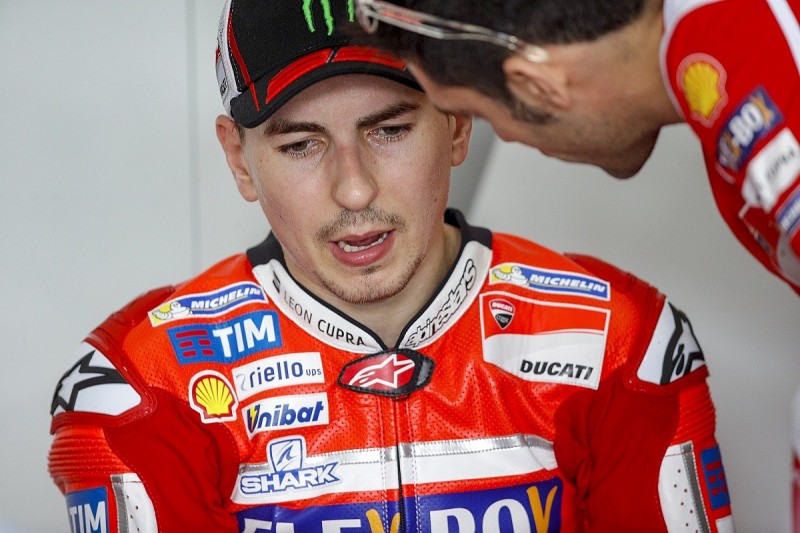 Lorenzo said the process of changing his riding style from Yamaha's M1 was ongoing.

"The worst thing was that it was two [pieces of] bad news," he said of the end of Monday's running.

"I was used to always being competitive and always fast with my riding, and I don't remember being 17th and being so far from the top.

"I needed to change so much my riding, but that's what happens when you change the bike and to a complex bike like the Ducati.

"I didn't expect that the bike needed such a different riding style.

"I didn't understand I needed to change, I needed to be curious to ask the riders who have ridden the bike for so long for some secrets to speed up this evolution.

"Finally we did it in a shorter time than we expected."

Lorenzo will have Ducati test rider Michele Pirro as his trackside coach in 2017, the Italian taking the role Wilco Zeelenberg held alongside Lorenzo at Yamaha.