Marquez was the form rider in the first half of qualifying, the Honda pilot's 1m44.134s good enough to lead the way by 0.265 seconds over Yamaha's Jorge Lorenzo.

However Marquez's second run on new tyres was scrappier, and he did not manage to improve, as he was jumped by Lorenzo's team-mate Valentino Rossi at the end of the session.

Running behind Rossi and Suzuki's Maverick Vinales on the road, Marquez made mistakes on his third- and second-last laps, then arrived to yellow flags at Turn 5 after the chequered flag, when LCR Honda's Crutchlow had fallen.

Marquez cited his controversial warm-up crash at Silverstone in 2013 - also involving yellow flags and Crutchlow - as a motivator in backing off and abandoning the lap.

"Every time when I see the yellow flag, I slow down.

"I knew that it was the last lap of qualifying, I was thinking to push, but I saw many people there, also Cal, [and there was] too much risk.

"I lost the lap, but I prefer this than to have a crash and have a thing like Silverstone."

Rossi did not back off, and ultimately only lapped 0.175 seconds slower than the 1m43.954s he recorded on the previous tour to take pole.

"Usually I lose a lot of time with the yellow flags, I lose time to understand who has crashed," he said.

"In the last races I tried to stay concentrated.

"I saw one bike out, it was not on the line, and I continued to push." 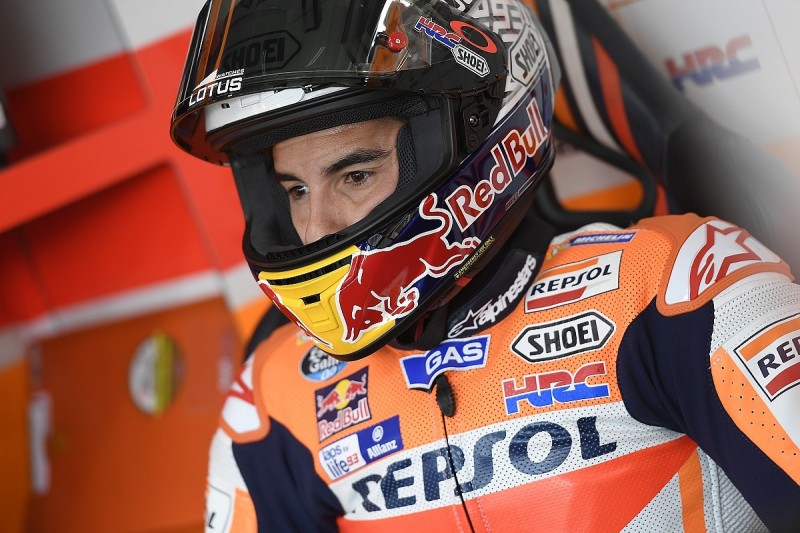 While mistakes dimmed his qualifying output, Marquez was fastest in both of Saturday's practice sessions.

Chasing his maiden MotoGP victory at Motegi, and an outside chance to clinch a third title if he wins, Marquez says he feels comfortable with his race pace.

"This morning I was very happy because yesterday we were fast but I didn't feel the best feeling with the bike," he said.

"This morning we did a big improvement. This afternoon in FP4 we tried some things but for quali we went back and it felt stronger, just some little mistakes with the second tyre.

"Race pace is where I felt slightly better.

"It looks like with new tyre I struggled a little bit to find the feeling on the braking point, but when it drops a little bit I'm able to manage better the limits."