Honda’s Marc Marquez topped a mostly wet MotoGP FP3 ahead of the French Grand Prix, with the conditions locking in a volatile Q1 group for qualifying.

Overnight rain left the Le Mans circuit soaked for the start of FP3, which meant already the qualifying groups for later this afternoon have been decided based on Friday’s times.

Suzuki’s Alex Rins – who will face Q1 later – set the initial benchmark on wet tyres at 1m48.807s, though top spot rapidly changed over the first 15 minutes of the session.

Rins, Tech3’s Danilo Petrucci, reigning world champion Joan Mir, Franco Morbidelli and Spanish GP winner Jack Miller all had turns at the head of the timesheets in the first 15 minutes.

Ducati rider Miller moved clear of the field with a 1m43.857s with just under half an hour of the session remaining, though crashed at the downhill section of La Chapelle just moments later.

In Miller’s absence, Marc Marquez moved to top spot with a 1m42.894s, which he improved on his following tour 18 minutes from the chequered flag to a 1m42.704s.

KTM’s Miguel Oliveira demoted Marquez with just under nine minutes remaining, the Portuguese rider jumping up to top spot with a 1m42.508s before bettering this with a 1m42.127s.

Marquez soon returned to the head of the timesheets however with a 1m41.783s and would see out the session with a 1m40.736s to top a session for the first time since the 2020 Spanish GP weekend.

The six-time world champion already bagged his place in Q2 on Friday, though second-placed Lorenzo Savadori on the Aprilia – who held top spot briefly in the closing stages – will have to go through Q1. 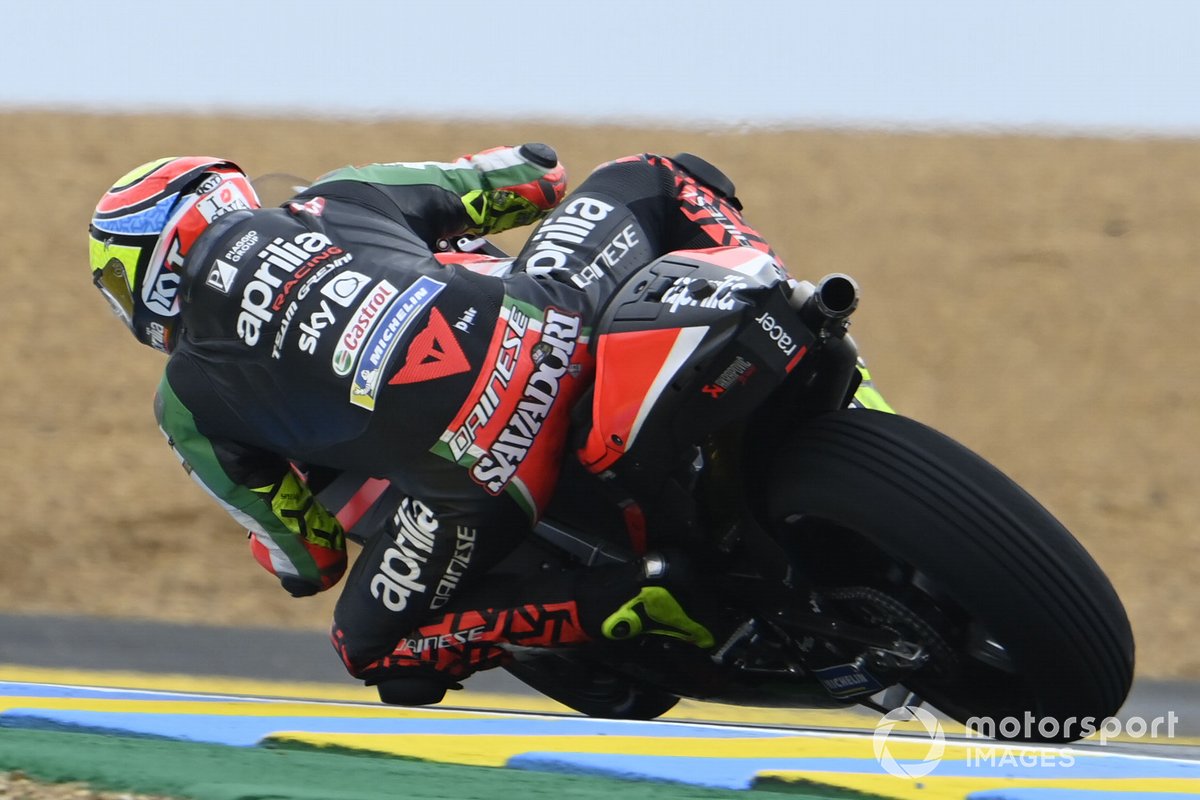 Championship leader Francesco Bagnaia was third on his Ducati in FP3, ahead of Oliveira and the other works Honda of Pol Espargaro – both of whom in Q2 - but will also face Q1.

Johann Zarco completed the top six on his Pramac Ducati, the Frenchman the only other rider in the top 10 in FP3 that has a place in Q2.

Both Suzuki riders Joan Mir and Rins in seventh and eighth in FP3 will have to go through Q1, as will ninth-placed Iker Lecuona – who had a crash late on at the Dunlop chicane – and Avintia rookie Luca Marini.

Alex Marquez on the LCR Honda in 11th in FP3 – who scored his maiden MotoGP podium in the wet at Le Mans last year – also has to go through Q1, though team-mate Takaaki Nakagami behind him will be in Q2 based on Friday's times.

Aleix Espargaro’s issues continued into FP3, the Aprilia rider’s FP3 interrupted at the start by a technical issues, leaving him 13th in the session. Two crashes in FP2 on Friday have locked him into Q1.

As the track dried in the closing stages of FP3, the Yamahas faded down the order, with Maverick Vinales the fastest of them in 16th on his factory M1 ahead of SRT’s Morbidelli, while Fabio Quartararo was 19th and Valentino Rossi (SRT) 21st.

All four riders will appear in Q2 later today, though Morbidelli appeared to hurt himself at the end of FP3 when he tripped in pitlane while practicing a bike swap.

SRT has since confirmed Morbidelli twisted his knee in the incident but has been cleared to continue the weekend and will undergo treatment in the Clinica Mobile ahead of FP4.

Miller had plummeted to 20th by the conclusion of FP3, though he has a place in Q2, while Brad Binder struggled in the conditions and was 3.387 seconds off the pace in last.