Ducati forced to call off Casey Stoner's next MotoGP test

The two-time MotoGP world champion returns to Ducati as a test and development rider this year, and tested its 2015 bike at Sepang before and during the first official pre-season test in February.

Stoner did not participate in Phillip Island's second test, and will not ride in the official three days of running at Losail this week, but had been slated to test at the circuit on March 6-7.

It was to have been the Australian's first taste of the 2016 Desmosedici, but has now been abandoned due to a rule banning private tests at a venue 14 days before it hosts a grand prix.

It is understood Ducati read that rule relating to the date of the race, Sunday March 20, but it instead applies to the start of the event, Thursday March 17 in the case of the Qatar Grand Prix.

Stoner will complete additional tests for Ducati during the year, but no plans have been outlined.

Iannone is pleased with the Italian manufacturer's progress, particularly on the new Michelin tyres, following a low-key test at Phillip Island.

"We are working well, getting a better idea of the tyres and the new bike and we managed to improve a bit more," he said.

"We still have to work on some aspects, but in my opinion we've got a very good, competitive package at this track, and there is room for improvement."

"I am very happy because I managed to keep a constant pace, and I even did my quickest lap three-quarters of the way through the long-run and this, in my opinion, means that we can go even faster," he said.

"We are still not completely right however, because during the simulation I could see that we have to improve some details, but in general I am really satisfied." 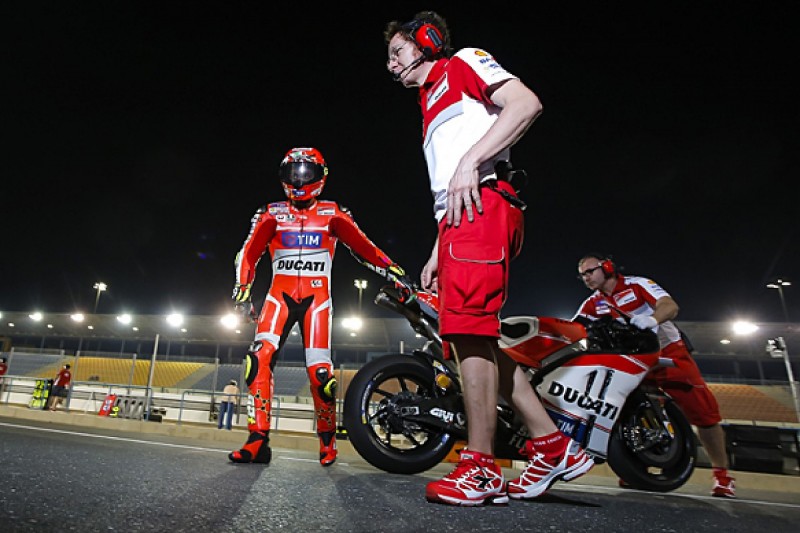