Franco Morbidelli snatched his maiden MotoGP pole position and headed a Yamaha 1-2-3 in qualifying for the Catalan Grand Prix, while Ducati's Andrea Dovizioso was only 17th

The battle for pole at Catalunya raged between all four Yamaha riders at the end of Q2, with Morbidelli heading Fabio Quartararo and Valentino Rossi on the same day the latter's 2021 future with SRT was confirmed.

Rossi set the early pace on his factory Yamaha with a 1m39.881s, though this was immediately bested by Maverick Vinales with a 1m39.655s.

Morbidelli then took over top spot with a 1m39.110s to end the first runs fastest, while team-mate Quartararo was only seventh after making a mistake on the way into Turn 10.

As the session entered its final few minutes, it was the Yamaha quartet lighting up the timing screens, with Quartararo edging ahead with a 1m39.008s.

But Morbidelli dug deep on his final lap and was impressive in the final sector of the Catalunya circuit to fire in a 1m38.798s to claim his first pole in the premier class and his first in grand prix racing since his final Moto2 season in 2017.

Quartararo (below) went for one final lap just as the chequered flag came out, but was unable to improve on second, with Rossi completing the front row for the first time this season. 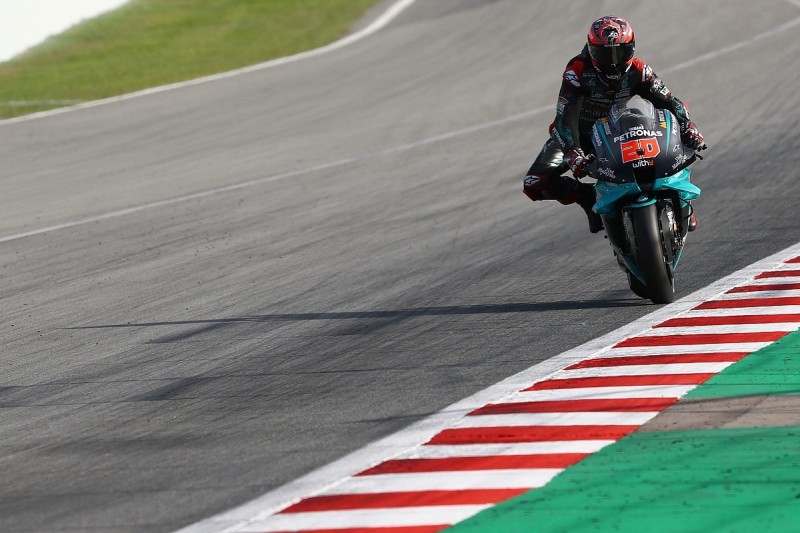 Pramac's Jack Miller was the best Ducati runner in fourth, the Australian's 1m39.225s coming early in Q2 on his only soft tyre run having had to use up an extra set to come through Q1.

Vinales was shuffled back to the middle of the second row, while Avintia's Johann Zarco moved up to sxith with his final lap to depose former team-mate Pol Espargaro on the KTM back to seventh.

Joan Mir could only manage eighth on his Suzuki, with Danilo Petrucci on the works Ducati and KTM's Brad Binder completing the top 10.

LCR's Takaaki Nakagami could only go 11th on his year-old Honda after progressing from Q1, with Miguel Oliveira 12th on the Tech3 KTM after an early fall at Turn 10.

Dovizioso's tough season continued, as the Ducati rider failed to get anything going in Q1 and could only produce a 1m40.109s good enough for 17th on the grid.

Marking the third time he hasn't escaped Q1, Dovizioso will start alongside Honda's Alex Marquez in 18th and the injured LCR Honda of Cal Crutchlow in 16th.

Alex Rins came close to getting into Q2 to join team-mate Mir, but was denied by Nakagami at the end of Q1 and will start 13th ahead of Francesco Bagnaia (Pramac) and Aprilia's Aleix Espargaro.