Crutchlow has featured regularly among the frontrunners in the 2018 season so far, winning in Argentina and claiming an assertive Spanish GP pole position on Saturday at Jerez.

The Brit, who rides for Honda satellite team LCR but also performs test duties for the manufacturer itself, is on a factory contract that runs to the end of 2019.

And while the Briton has repeatedly stated he's happy with the current support he receives from the manufacturer, he's also said he expects to be "repaid" in the future.

Responding to suggestions that he has an eye out for the Suzuki and Ducati factory rides that thus far remain vacant for next year, Crutchlow said: "I didn't think about it, I didn't say anything about going anywhere else.

"I have a two-year contract. And at the moment I'm happy with Honda. But there becomes a time in your life where you have to be rewarded for what you're doing."

"I work very, very hard for Honda, week in, week out, and especially in the winter time. And I don't know, maybe that'll come back round and I'll be repaid for that soon." 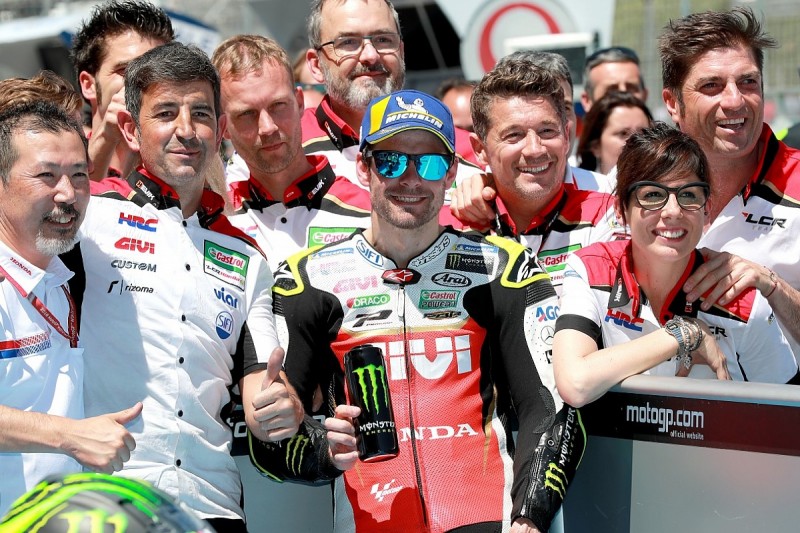 Asked whether his desire to be "rewarded" suggested that he wasn't happy with the current level of support from Honda, Crutchlow said: "The support I've always had with Honda has been good. The moment I arrived in the garage at the end of 2014, I was already supported well, and Lucio [Cecchinello, LCR team boss] has been supported very well as well.

"But, you know... I know you guys are not stupid. If there's a guy that's made a step, that he's consistently fast week in week out, doing a good job, winning races. Then you have to look at it.

"And if you get no more support, or less support, then you know, things start to always change."

The Repsol-backed Honda factory team has already re-signed reigning champion Marc Marquez for the next two years, but is believed to be still considering whether or not to keep his current works team-mate Dani Pedrosa.

Crutchlow refused to be drawn on whether he expects to be first in line should Honda decide to drop Pedrosa, saying: "I have not discussed it with them up until now, and I will not discuss it with them because I don't need to. It's not my place."

Scott Redding believes he risked his life 'for nothing' in qualifying