Cal Crutchlow says it is impossible to compare his career to that of World Superbike champion Jonathan Rea, after the latter claimed he could have done "better" in MotoGP

Rea recently told Autosport that he feels he could have enjoyed more success than three-time MotoGP race winner Crutchlow if he had got the chance to race in grand prix racing's top tier.

The pair last raced together over a full season in 2010 (pictured below), during Crutchlow's only season in WSBK before he left the production-based series to pursue a career in MotoGP with Tech3 Yamaha.

Rea meanwhile stayed in WSBK, making a pair of MotoGP starts for Honda in 2012 as a substitute for Casey Stoner before going on dominate the championship with Kawasaki starting in 2015.

The Northern Irishman recently picked up a record-equalling fourth WSBK title and this year has also broken records for most race wins in total and consecutively.

Crutchlow initially refused to comment on Rea's opinion, but when pushed further, he quipped: "He would, he'd beat everyone in MotoGP. But we're never going to get to see it, are we?" 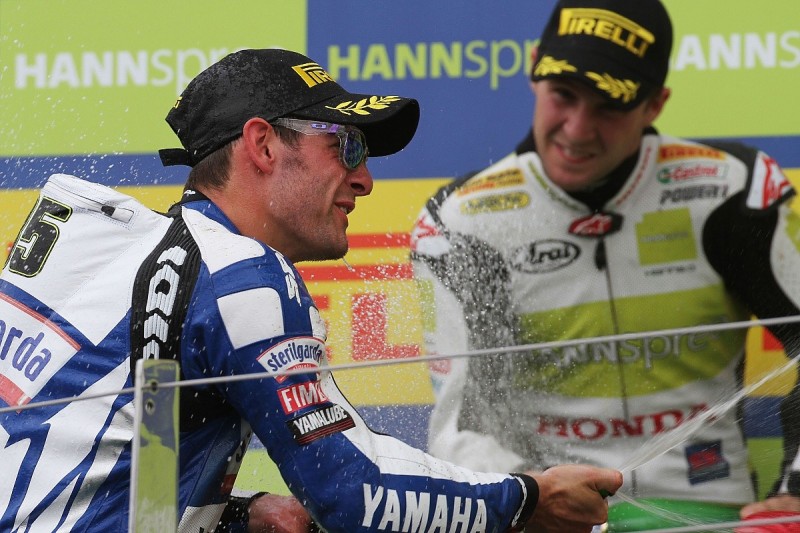 He then added: "First of all, I don't know what he's talking about. "But at the end of the day, he's done a great job, he's won the championship [in WSBK] again.

"I don't think you can compare our careers at all, in any way, shape or form - or our lives."

Crutchlow recently signed an extension to his factory contract with Honda, but says his approach to this weekend's Japanese Grand Prix at Motegi will be no different to other races despite it being the manufacturer's home race.

"This weekend we have to take like any other," he said. "Of course it's Honda's home Grand Prix and we all want to push, but it doesn't mean we suddenly start flying this weekend.

"We'll give 100%, the same they're giving us on and off the track. We did an event in Tokyo this week, then we went to the R&D department today and the support we got was phenomenal.

"Last year we had a bad race, and also in Thailand [two weeks ago], so hopefully we can do better."

Dovizioso: Ducati would be stupid not to consider Marquez for MotoGP