Jorge Lorenzo has been passed fit to take part in MotoGP's Japanese Grand Prix but is unsure as to whether he will race, having not yet fully recovered from injury

The Ducati rider has suffered injuries in the last two rounds, suffering contusions to his right ankle and left wrist in a practice crash at Buriram.

In the previous MotoGP weekend at Aragon, he dislocated a toe and fractured the second metatarsal on his right foot.

Lorenzo ended up missing the race in Thailand and said his participation for Motegi depended on his rate of recovery.

On the Thursday before track action begins for this weekend's Japanese Grand Prix at Motegi, Lorenzo feels he hasn't improved enough.

"I am very disappointed because I knew the fracture existed after the scan but I thought after 13-14 days the injury would improve and I would feel much better here," he said. "Honestly I don't feel much better, I actually feel more or less the same.

"In the first days I feel some improvement, that is why I started to swim and make some exercises, but when I slightly force the wrist, I feel quite a big pain after some hours.

"The wrist is quite inflammed, the feeling is not good, the pain is quite big, [when] making some movement."

Lorenzo, pictured below in the previous round at Buriram, will ride in the opening practice session at Motegi but is wary of worsening his condition in a congested run of MotoGP fixtures. 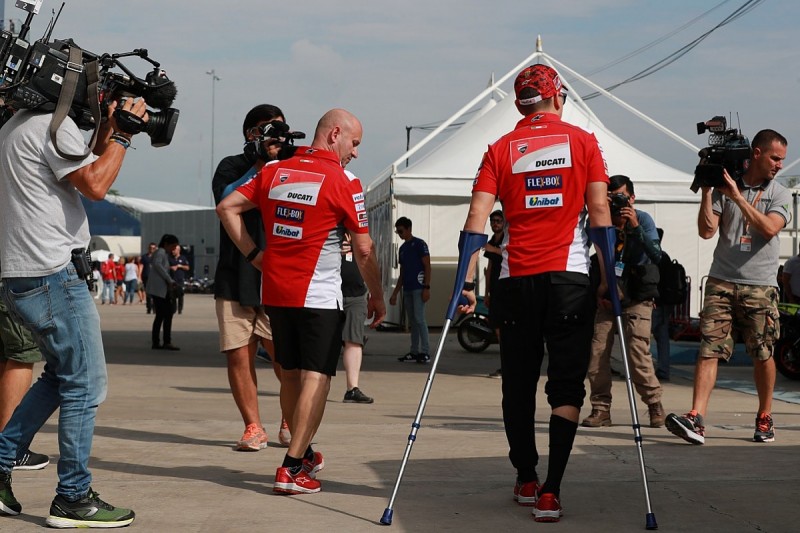 "I don't expect to feel very good on the bike tomorrow but anyway I'm gonna try to ride because you never know," he said.

"It's complicated because this type of injury without operation needs lots of days to recover, and now we have to race three in a row so situation is difficult.

"For sure [it can get worse], but also I know it is not going to change so much in just 8-9 days in Phillip Island.

"For Malaysia I think it will be quite a bit better, not for Phillip Island and for sure not for tomorrow.

"What worries me is not the pain, because I race many times in even more painful conditions, what worries me is I didn't get the operation and the bone can go out of place if I force it, especially in this brake of hard braking [areas]."

Lorenzo's injuries came from two violent high-side crashes, and he says Ducati has reacted to ensure a repeat does not occur.

"I think they understand what happened and will make some new things for this, will not happen again."