With second place in the British Grand Prix, Crutchlow moved up to eighth and the top satellite rider in the championship, having been 18th after the Dutch TT in June.

In the four races since, Crutchlow has taken second at the Sachsenring, his maiden victory at Brno and pole on home soil, and scored more points than any other rider.

The first part of Crutchlow's season was punctuated by front-end crashes pushing to compensate for Honda's acceleration deficit, something that is still a limitation in dry qualifying sessions.

When asked about his improved results, Crutchlow said: "I have no idea why.

"I feel good on the bike, I am able to push, I know my limit was always better than what I showed at the start of the year.

"We are struggling a little bit still in qualifying, I know I qualified pole [at Silverstone] but in the dry we're just struggling to do one of the one-off laps.

"We're struggling to get into the top 10 sometimes.

"Obviously a lot of this is the other riders ripping the arse out of other riders, it's difficult when they get such a slipstream, but I feel in great shape at the moment." 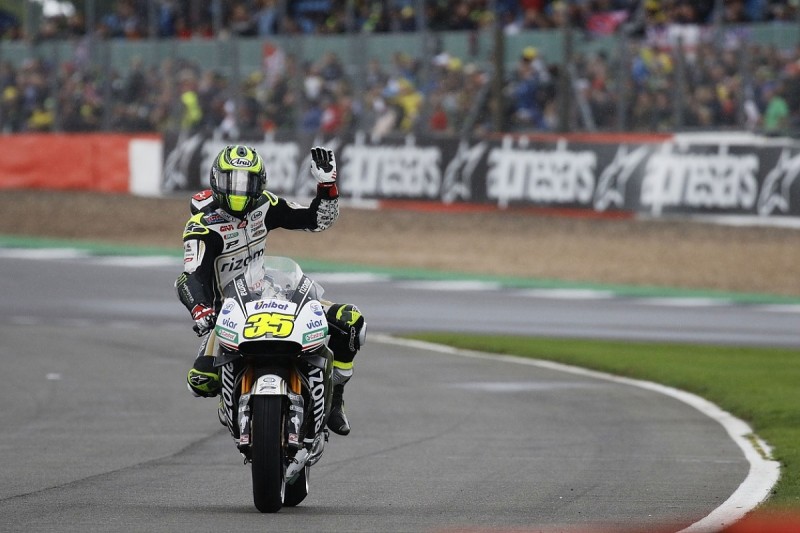 Crutchlow tried a new Honda chassis at Silverstone, but he downplayed its importance in finishing two spots ahead of championship leader Marc Marquez.

"I'm riding the bike in a better way," he said.

"We used a new frame that Honda wanted us to evaluate but I don't think that is necessarily the reason, simply because I think I was a tenth faster on the old one over the weekend than what I was on this, so back-to-back it might just be a little bit of a different style."

In July, Crutchlow was Honda's representative in a Michelin test at Sepang, and its most-senior rider at the pre-Austrian GP test skipped by factory pair Marquez and Dani Pedrosa.

While he says Honda's electronics development has stabilised, there are other items in the pipeline.

"I know that when we first went to Malaysia and Australia to test [pre-season], it was quite difficult for Honda," he said.

"But electronically, about five races ago we had some step, and since then really it's been the same.

"I'm trying some things for HRC with regards to bettering our bike as a whole.

"At the moment we haven't found so much, I think there's a big area we can improve with our bike, especially on corner entry."