Catalan Grand Prix poleman Jorge Lorenzo says he feels "probably even better" in Barcelona than he did in Mugello, where he took his first MotoGP victory with Ducati

Lorenzo, who has never started a Barcelona MotoGP race outside the front row, has been the form man for much of this weekend and beat Marc Marquez in qualifying for what was his first pole for Ducati.

It comes two weeks on from his maiden Ducati win, as he controlled the Italian Grand Prix from start to finish.

"Obviously I'm really satisfied and really happy about the pole position - after the victory, it's the most important thing you can get," Lorenzo said after Barcelona qualifying.

"But especially I am happy about the feeling on the bike.

"In Mugello I felt great and here in a different track I feel probably even better. Better than in the [Barcelona] test one month ago, always with a good pace, and feeling really comfortable with older tyres and everything.

"Laptime yesterday was so good that we imagined [it[ was not necessary to put another [new] tyre [in FP3], and we concentrated to see what happens with the bike with very old tyre, and [the pace] was pretty good.

"In the afternoon conditions changed, so it's a little bit more difficult to keep the pace for everyone. But till now we've been competitive during all the practice, so this is a good signal."

Lorenzo's qualifying was not straightforward however, as he ended the first run over four tenths down on Marquez and was visibly irate when returning to his pitbox. 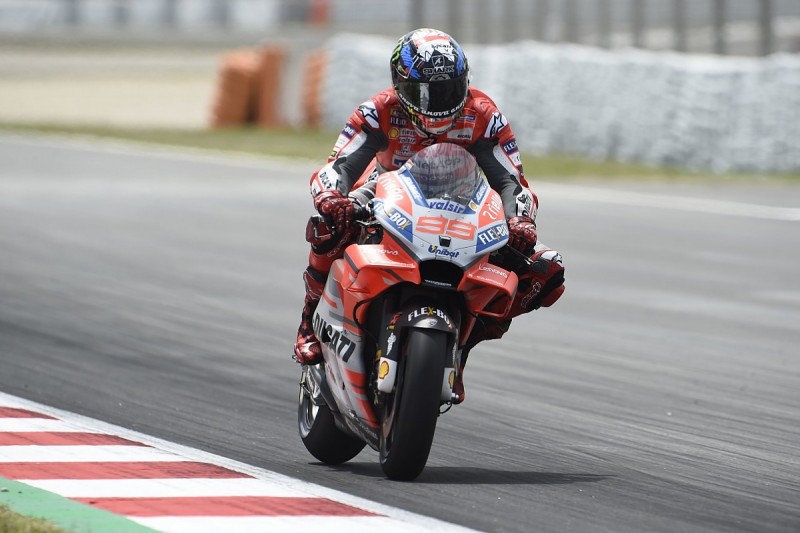 "In the first [rear] tyre, on the qualifying, I felt something was wrong, had no grip in the left [hand side]," Lorenzo explained. "Looks like [it] could be not good warming up of the tyre.

"But it didn't give me good confidence and I was really careful to avoid the crash because [it] really could happen.

The Barcelona pole added to what has been a remarkable turnaround in Lorenzo's fortunes, as he'd endured a rotten start to 2018.

Lorenzo has insisted his Mugello breakthrough was down to a combination of earlier Ducati updates and a fuel tank shape tweak, and maintained that there had been no other factor when asked about it in Barcelona.

"[It's] just this, what changed from Le Mans to Mugello," he said.

"I think already in Jerez, in Le Mans, I was competitive. I have the real speed, I just needed the last step, the last piece that give me the necessary energy to keep for longer this speed.

"And that's what happened in Mugello, even if not everybody believe that."