While Pedrosa secured his second pole of the season - his other coming at Jerez last month - Yamaha pair Maverick Vinales and Valentino Rossi could only manage ninth and 13th at Barcelona.

Marquez was in the thick of the action throughout, the reigning world champion crashing five minutes in, after losing the front end at Turn 3.

He was able to get his Honda restarted and rode it back to pitlane, but following a crash in practice four earlier - one of two in practice on Saturday - did not have a second bike to switch over to.

Mechanics quickly repaired the RC213V, including fitting a new footpeg and bending the right handlebar back into place, and he rejoined with five minutes left on the clock.

At the time, Lorenzo led the way with a 1m44.201s, until Pedrosa turned a 1m43.870s to go three tenths clear with three minutes remaining.

There was no change at the top thereafter, with Pedrosa taking his third pole position at Barcelona, while Lorenzo recorded his first front row start with Ducati.

Marquez jumped back onto the front row and into third behind Pedrosa and Lorenzo with his first flying lap after the repairs, completed with just over one minute left on the clock. 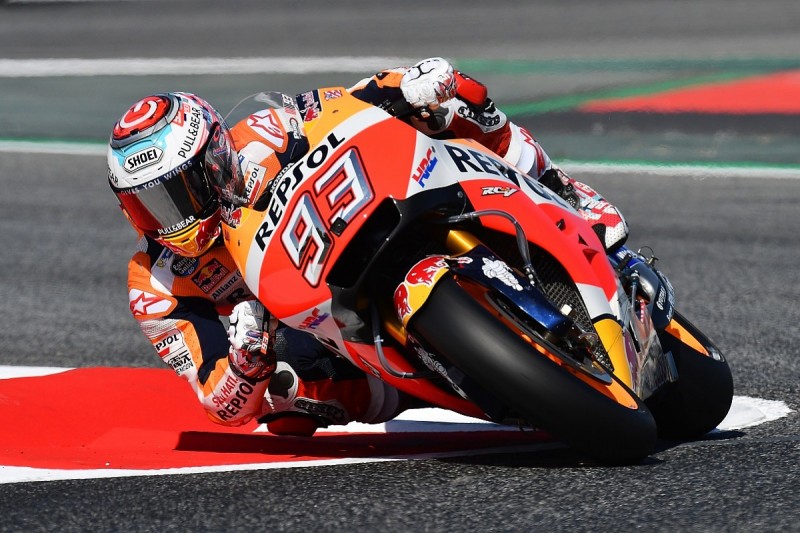 He was demoted to fourth but fastest of all through the first sector on his next lap, only to crash for a second time in the 15 minutes at Turn 5.

Lorenzo's team-mate Andrea Dovizioso will line up start seventh, ahead of the two men who progressed to the main session from Q1, Tech3 Yamaha's Jonas Folger and Vinales.

Rossi will start 13th, after missing out on a Q2 berth by just 0.040s on his final lap, with Folger's team-mate Jonas Folger a further 0.020s adrift.

His primary bike was unable to start when Q1 began due to a fuel-pump problem and Lowes qualified 21st on his second bike, having missed the bulk of the 15 minutes of Q1.

Suzuki rider Sylvain Guintoli missed qualifying due to illness, while KTM's Bradley Smith was also sidelined due to a finger injury sustained in a crash during fourth practice.