Aragon MotoGP: Marquez 'pushing too much' before qualifying crash

The Honda rider had been firmly in contention to take his fifth consecutive pole position at the Spanish venue until the closing minutes of qualifying, when he fell on entry to the Turn 12 left-hander.

At that point, Marquez was on provisional pole, but the incident meant he was demoted to fifth by the time the chequered flag fell, as Maverick Vinales took pole.

Explaining the incident afterwards, Marquez conceded he had just been giving it too much and that approaching Turn 12 slightly wide caught him out.

"Of course I'm not happy today because it was my mistake," he said.

"I tried to be faster than I felt [comfortable doing], pushing what I thought would be enough to be battling for pole.

"But I pushed too much, and on that braking point I was a little bit wide, but I tried to go in [the corner] anyway - it was my mistake.

"Tomorrow we know we need to be careful in that corner." 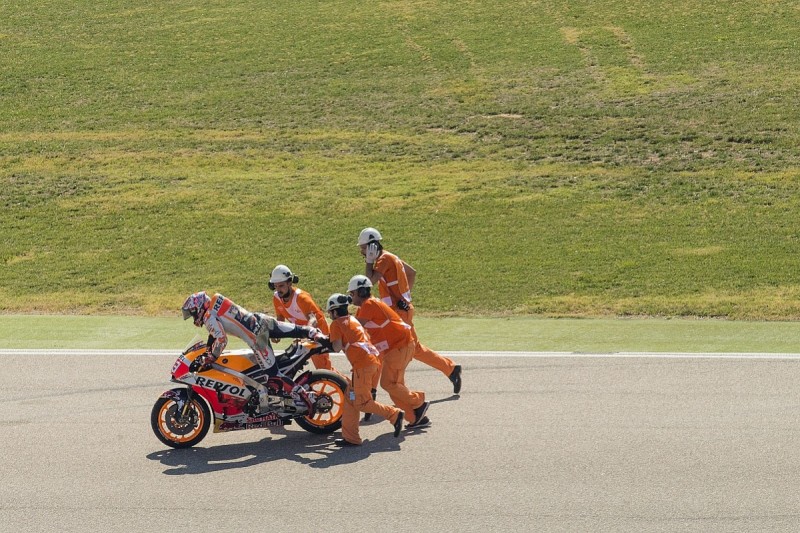 Asked if he felt starting from the middle of the second row will be a problem on Sunday, Marquez added: "We will see. I think tomorrow in the warm-up everybody will improve.

"At the moment, the favourite is Maverick - he's on pole and he's fast, but tomorrow we'll try to improve.

"I start fifth, [and] I think it's important to understand the track, the limits.

"Last year I started on pole but after three laps I was [fifth] because of a mistake."

Despite his crash, Marquez was still satisfied to have improved his feeling aboard his Honda after struggling for confidence in FP3, despite topping the Saturday morning session.

"We were a little bit unlucky from FP3, I was fast but I didn't have the [right] feeling with the bike and the set-up was not working as we expected," he explained.

"We made a few big changes for the afternoon, then I felt better [as it was] easier to keep the pace.

"Tomorrow the tyre [choice] will be a question mark, especially the rear tyre.

"Another thing is that [going] from a new tyre to a used tyre might change [things] a lot.

"The tyres are dropping quite a lot and it is more difficult to understand."

Zarco: MotoGP riders behind Rossi at Aragon have to accept 'shame'