Marc Marquez led the way in a damp opening practice session for MotoGP's Aragon Grand Prix, while Valentino Rossi ended up 18th-fastest on his official return to action

Spots of rain fell at the Spanish circuit shortly before the start of the 45-minute session, and the resulting damp track meant there was little activity in the first 15 minutes.

Aspar Ducati's Karel Abraham was the only rider to set a lap time in the opening stages, posting a pedestrian 2m30.530s that stood until 16 minutes in, when Tech3 Yamaha man Johann Zarco lowered the benchmark to a 2m12.405s.

A succession of improvements followed, with Hector Barbera, Dani Pedrosa, Jack Miller and Andrea Iannone all trading fastest times, until Marquez moved to the top on a 2m02.006s with a little over 20 minutes to go.

The arrival of more rain late in the session meant that time stood but Marquez eventually beat it with three minutes to go - the reigning champion improving to a 2m01.420s and then finally a 2m01.243s.

Pedrosa completed a works Honda one-two with a last-ditch effort of 2m01.741s to vault ahead of Zarco, who ended up 0.785 seconds adrift of Marquez in third.

Marc VDS rider Miller made it three Hondas in the top four, while KTM wildcard Mika Kallio went fifth-fastest, just over a second off the pace. 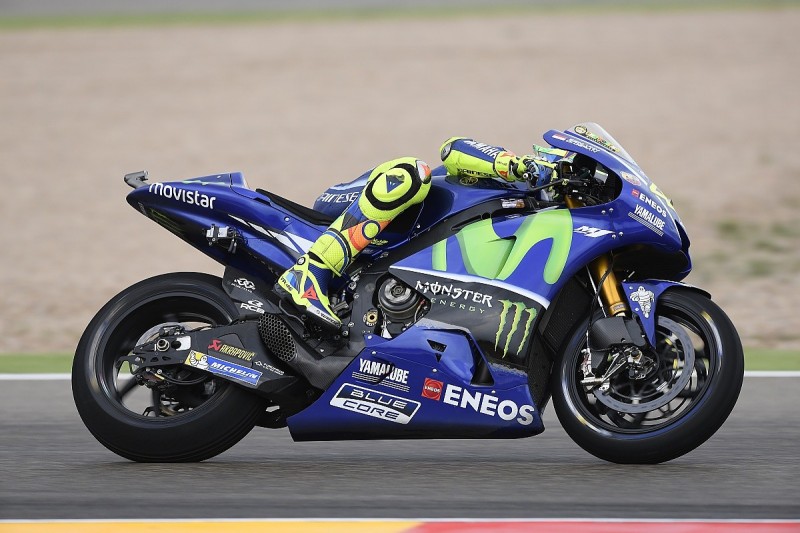 In his first official MotoGP session since breaking his leg 22 days ago, Rossi completed eight laps, the fastest being a 2m04.066s - 2.823s slower than pacesetter Marquez.

That was still enough to beat Yamaha team-mate Maverick Vinales, who wound up 20th and 2.855s off the pace.

KTM rider Bradley Smith failed to set a lap time at all due to a mechanical problem.