Rossi passed an on-track fitness test at Aragon on Thursday and will use Friday practice to assess whether he can contest the remainder of the weekend.

The sessions will take place just 22 days after Rossi broke his leg in a motocross training accident.

Rossi, who missed the previous Misano round as a result of his injury, is fourth in the riders' standings and 42 points from the summit.

"It's not for the championship," he insisted, when asked if he had returned early to boost his title hopes.

"Everything is open, but especially for the first three [riders in the championship].

"I want to try to come back in a good shape as soon as possible and I think this is the best way.

"I want to be here, I suffered a lot [by missing] the Misano race."

"You can look at his career and can even ask why is he still riding?" said Jarvis.

"He loves this sport, he is a racer. We still have five races to go where anything can happen, as we've seen in Formula 1.

"Who would expect that? Now suddenly Lewis [Hamilton] has a huge jump on the Ferraris that should have been reversed.

"There are three riders ahead of Valentino in the championship, but you never know. 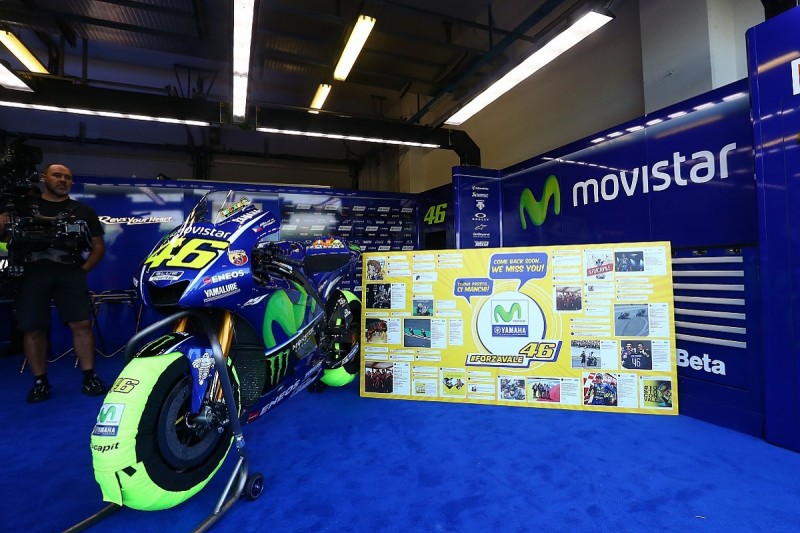 Rossi said riding at Aragon was crucial to his preparations for MotoGP's upcoming flyaway races at Motegi, Phillip Island and Sepang.

"In Aragon it will be very difficult to finish the race, but it's very important to not lose another one, because after you have three weeks before Motegi," he said.

He added his latest injury recovery had been smoother than the last time he suffered a leg fracture in 2010.

That year he finished fourth on his racing return at the Sachsenring, but Rossi was reluctant to set any targets for the Aragon weekend.

"Last time [in 2010] was a big surprise - I lost the podium on the last lap with [Casey] Stoner, in the last corner maybe, but it was a surprise for me [that I was competitive]," he said.

"Now is a bit different. The level is very high but also the last [rider] is usually 1.5 seconds from pole position.

"I don't know my level, I need to understand tomorrow.

"[To] race, or finish the race, is a good target - and maybe take some point also. But it's very early to say, [it's] better we speak tomorrow."