Pedrosa posted a 1m59.858s effort, the weekend's only lap time under two minutes so far, at a damp circuit.

Track conditions at the start of the session mirrored those from the earlier first practice, and it was again Marc Marquez who prospered initially, bettering his morning benchmark with a 2m00.933s lap a third of the way into practice two.

But Marquez responded instantly, lowering the time to 2m00.459s, with team-mate Pedrosa slotting in behind with a lap 0.083s off shortly thereafter.

The pair remained out front until the closing minutes of the session, LCR's Cal Crutchlow briefly making it a Honda 1-2-3, before Lorenzo split Marquez and Pedrosa on the timing screens.

Lorenzo's next lap, a 2m00.072s, took him to the top spot, only for Pedrosa to then breach the two-minute barrier.

Tech3 Yamaha's Johann Zarco moved up to third at the chequered flag, demoting Marquez, who had opted against a last-gasp flying lap.

Karel Abraham was fifth for Aspar Ducati, ahead of Crutchlow and Aprilia rider Sam Lowes, while Dovizioso led Espargaro brothers Aleix and Pol in eighth. 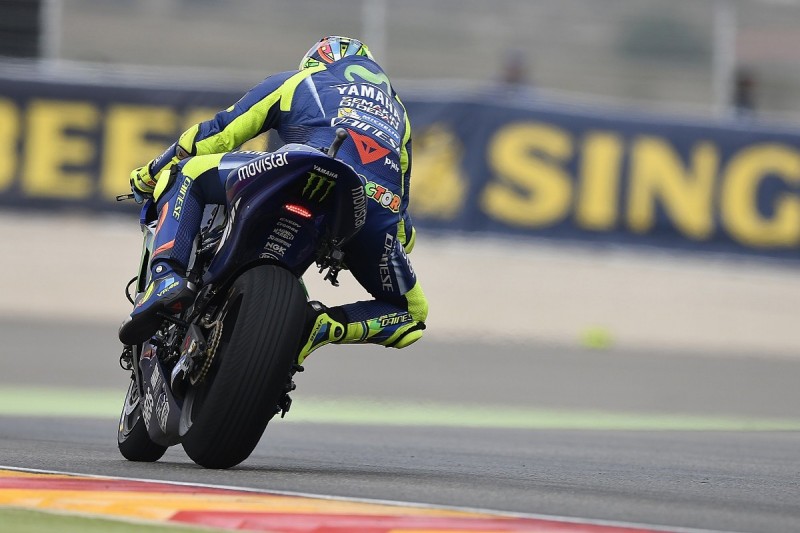 Rossi, making an earlier-than-expected return to track action this weekend after breaking his leg in late August, was mixing it among the frontrunners for much of the session, but ended up 20th, two seconds down.

His Yamaha team-mate Maverick Vinales, on the other hand, was firmly among the backmarkers before a late improvement put him 17th.

Both Vinales and Rossi are therefore outside of the top 10 on combined practice times and are not currently on course to automatically progress to Q2, although this will likely prove irrelevant if, as is expected, the weather improves drastically for Saturday's track action.

Aragon MotoGP: Vinales 'really frustrated' by pace in the wet