MotoGP returnee Marco Melandri needs to do more to match the effort his Aprilia team is putting in, according to its racing chief Romano Albesiano

Melandri has openly admitted he had misgivings about being brought back from World Superbikes into MotoGP by employer Aprilia, which has joined forces with Gresini for its new factory programme.

The Italian was slowest on two of the three days of the first 2015 test at Sepang last week.

Amid reports that Melandri had urged Aprilia to let him return to Superbikes, Albesiano said the team was confident the 2005 MotoGP runner-up could succeed in the series again, but needs more from him.

"I had hoped he'd struggle less, but we aren't leaving him alone - we are all behind him," Albesiano told Italian magazine Motosprint.

"I'm completely convinced that he'll come out of it.

"We put in all the effort, the will and the ability to help him, but he too must meet us halfway."

Albesiano believes Melandri's team-mate Alvaro Bautista is thriving in the Aprilia project so far, partly because he is not having to reacclimatise in the way Melandri is. 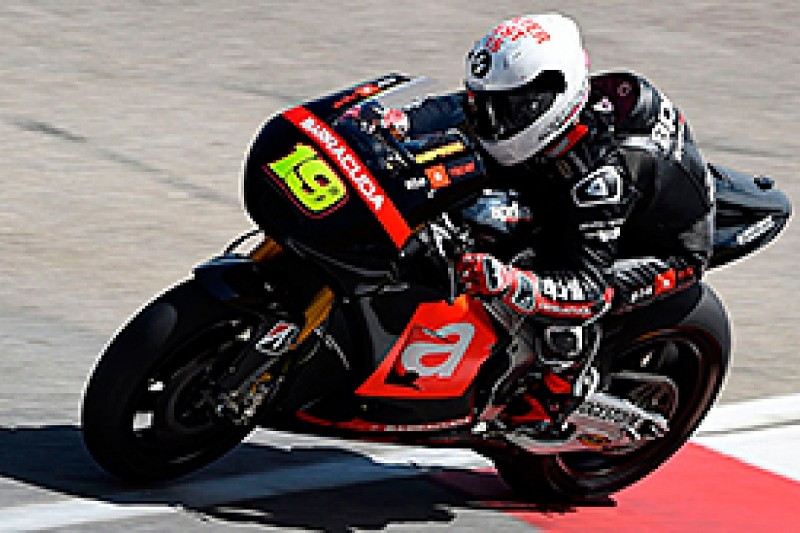 "He is already inside this environment, MotoGP, and inside this technological situation," said Albesiano of Bautista.

"Our job will also be to keep his spirits, his motivation and his performance high.

"I'm convinced he is having the type of experience he wanted, with being a works rider with a company that sticks with him in order to do the best and get the best.

"So Bautista is totally motivated and I can see a very nice season ahead of him."

Bautista's best position in the Sepang tests was 15th on the opening day.

Albesiano said Aprilia's initial goals were modest but that he expected better things by the end of the year.

"MotoGP is a very important and demanding challenge," he said.

"I don't think our company has ever faced this challenge the way we are doing now.

"Our realistic objectives are to be in the top 15 in the first half of the season, and to get in the top 10 in the second half. Should that happen, I'd consider it a reached goal."

Marco Melandri admits he was reluctant to return to MotoGP