Aprilia MotoGP rookie Lowes will have to relax, Espargaro says

Sam Lowes "needs to relax a little bit" when he steps up to MotoGP next year as a rookie, according to Aprilia team-mate Aleix Espargaro

The Briton will be one of four rookies on the 2017 MotoGP grid, alongside Moto2 champion Johann Zarco and fellow intermediate-category race winners Alex Rins and Jonas Folger.

Racing with Gresini, which runs with the Aprilia MotoGP programme, Lowes won a pair of races in Moto2 in 2016 and also led the championship on two occasions.

However, he failed to finish six races, and ended the year topping the 'most crashes' statistic across MotoGP, Moto2 and Moto3 with 30 in grand prix weekends.

"He's a really talented rider, with the Moto2 bike he was really impressive.

"As a good friend, he needs to relax a little bit.

"He wants to be really competitive right now and everybody in this garage knows he's fast.

"He just needs time, MotoGP is not that easy."

Espargaro joins Aprilia from Suzuki, where he had Maverick Vinales as his team-mate for the last two seasons.

Vinales was a rookie in 2015, and won a race in '16 on his way to fourth in the championship, and he will join Yamaha next year as Jorge Lorenzo's replacement.

"Maverick is one of the best riders I've ever seen in my life and in 2015 he struggled a lot," Espargaro said.

"He just beat me in two races all season [when both riders finished] and look at the level he's at now.

"So [with Lowes] we have to be patient at the beginning but I can understand that sometimes we want to be quick immediately." 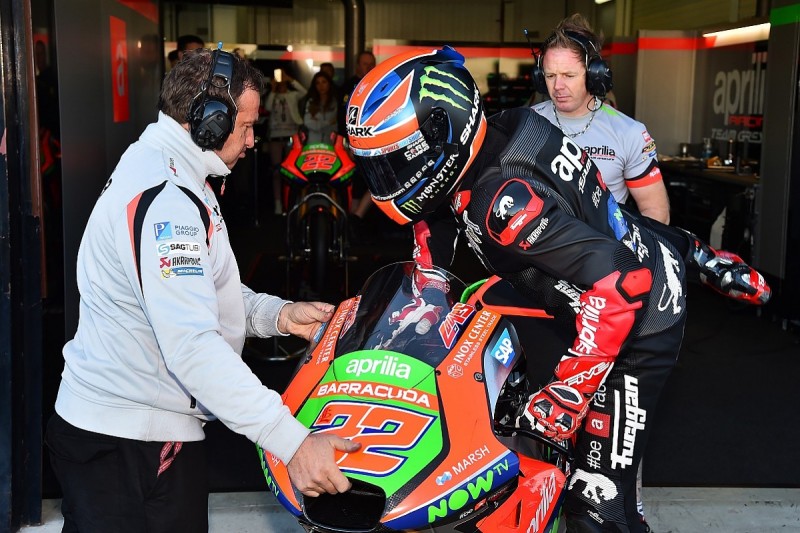 Lowes started his Aprilia testing programme mid-year, but fell during the first of the two post-season days at Valencia.

That ruled him out of the second day, and also compromised his programme at Jerez one week later, turning 50 laps over two days compared to Espargaro's 80.

Next year will be Espargaro's seventh full-time campaign in MotoGP, and he believes he can help Lowes get up to speed, and that they can both help Aprilia's progress.

"In the past I've had really good relationships with all my team-mates; with Maverick now we are really really good friends.

"Sam is a very easy guy like me so I will try and help him as much as I can.

"Two fast riders growing the bike together will improve the bike quicker.