KTM and its satellite squad Tech3 have unveiled the liveries they will race in the 2021 MotoGP season at its official launch presentation.

This season will mark KTM's fifth in the premier class having made its debut back in 2017, and will be its third supplying machinery to Tech3.

Last year proved to be a banner season for KTM, with rookie Brad Binder securing the marque its maiden MotoGP victory at the Czech Grand Prix, with Miguel Oliveira adding two more to its tally with Tech3 at the Styrian and Portuguese GPs.

As a result, KTM has lost its concession benefits for 2021, but - after agreement between the manufacturers - will start the campaign as the only non-concession marque with a brand-new bike as it was permitted to develop a new engine.

KTM will field Binder and Oliveira at its factory squad this year, while Tech3's line-up will feature Iker Lecuona and Ducati exile Danilo Petrucci.

"The whole journey so far has been a dream, but the project started as well with a dream to become a GP winner in that class, so it is amazing to look back and see we have these GP wins," KTM boss Pit Beirer said.

"But I definitely don't want to commit that we are already title contenders.

"I think this pressure should still be on other guys in the paddock, but we are really, really happy that the dream came true with these GP wins, they are a fact, they are on paper and we are definitely happy for more." 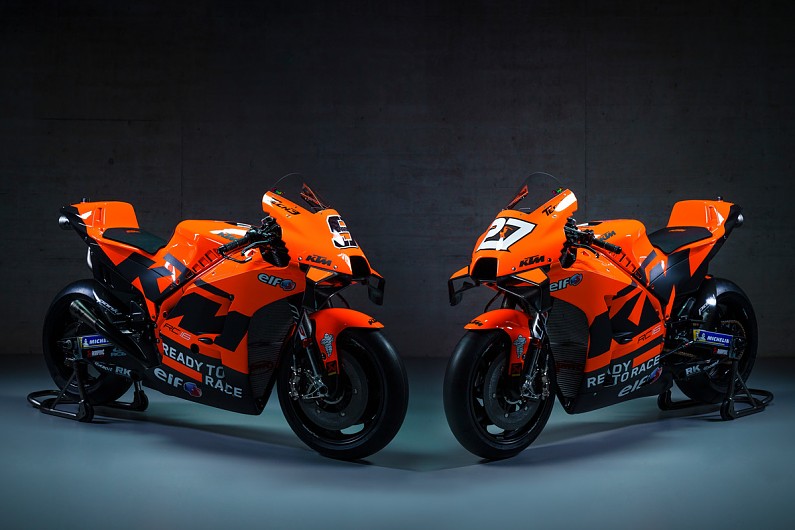 While the factory squad's colours remain largely the same as last year, Tech3 is sporting a striking new all-orange livery after Red Bull withdrew its title sponsorship at the end of last season.

On the Tech3's new livery, Beirer added: "Looking to that bike makes us smile.

"It is a very clear statement: KTM have arrived to MotoGP.

"We are very happy and proud to see the bike and I cannot wait to see it in the race because bikes always look nice when they ride for top positions.

"But I think it is a very clear statement that KTM have arrived in MotoGP and we fell in love with this new design already."